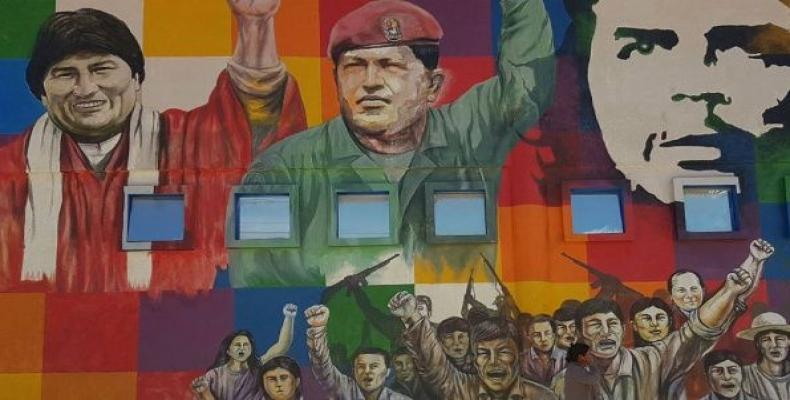 Morales also said foreign and domestic attacks against President Nicolas Maduro and the Bolivarian Revolution are intended to send a threatening message to anti-imperialist governments around the world.

“The plan of the empire is to overthrow the constitutional president elected by Venezuela, Nicolas Maduro," as a warning to other revolutionary governments.  And Morales added: “Any internal conspiracy or external intervention is intended to steal Venezuelan oil.”

For weeks, opposition demonstrators have held violent protests in several cities across the country, calling for regime change and international intervention.  The protesters, backed by the U.S. government and the Organization of American States, the OAS, have also supported calls for privatizing Venezuela’s publicly-run Petroleum of Venezuela, or PDVSA, oil and natural gas company.

Venezuelan authorities have called on the OAS to condemn the violence perpetrated by the opposition, but to no avail.  Venezuela's Ministry of the Interior said recent attacks against civilians and police were planned by the opposition after three people were killed on Wednesday.

Among those killed during protest violence Wednesday was Niumar Jose Sanclemente Barrios, a 28-year-old sergeant with the National Guard, who was apparently killed by sniper fire during riots in the Caracas suburb of San Antonio de las Altas.

“We know there are groups interested in selling the world a country in chaos,” Venezuelan Vice President Tareck El Aissami said on Wednesday after the murder.  He added that opposition leaders are trying to blame the government for the violence, but that the violent actions are coming directly from the right-wing opposition.