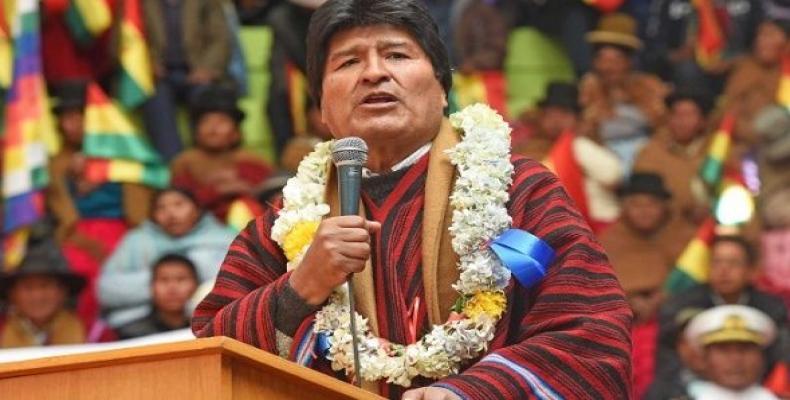 La Paz, January 24 (RHC)-- Bolivian President Evo Morales has presented a report on government progress under his administration to the country’s Plurinational Legislative Assembly on the 12th anniversary of its foundation.

“There are already 12 years of social and political stability, 12 years of the formation of the Plurinational State, and I am here to give an account to all the Bolivian people,” Morales said, thanking those who accompanied him during his administration.

The head of state said “the presence of assembly members of all colors, of all sectors, is proof that the people came to power.”  Evo Morales said that his country’s economic, political and social achievements have made Bolivia one of the fastest-developing and improving economies in South America.

“We have showed that our beloved Bolivia is moving forward.  We have important data from international organizations where we demonstrate the growth of our nation and the union of the Bolivian people.”

The Indigenous president showed a graph with data from the World Bank and the International Monetary Fund proving that Bolivia is the “first in economic growth in all of South America.”  He compared growth between 1994-2005 to 2006-2017, pointing out that GDP boosted significantly during his tenure.

"Despite international economic onslaught, we continue to grow and become one of the economic engines of Latin America," Evo Morales said.  The Bolivian leader also highlighted government support for public investment, demonstrating that the central government supported governorates, municipalities and universities in the execution of their projects.