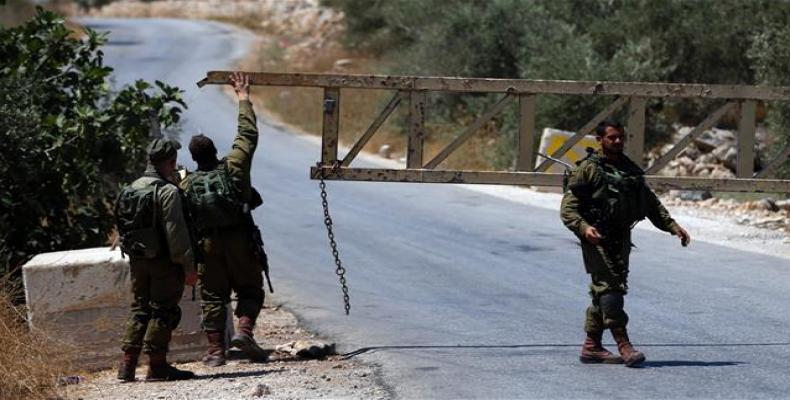 Ramallah, June 19 (RHC)-- Israeli military forces have put a village in the central part of the occupied West Bank on complete lockdown in the wake of an alleged stabbing attack, which left a female Israeli border police officer dead.

Palestinian sources, speaking on condition of anonymity, said over the weekend that Israeli forces have surrounded the village of Dayr Abu Mash’al, located 24 kilometers west of Ramallah.

An Israeli police spokesperson also said in a statement that Israeli Prime Minister Benjamin Netanyahu had approved a decision to rescind all permits issued for Palestinians during the Muslim fasting month of Ramadan and Eid al-Fitr, which marks its end.

An unnamed Israeli police spokesperson said the three Palestinians were “shot and killed” following the attack.  Dayr Abu Mash’al is the hometown of the three slain Palestinians.

The occupied Palestinian territories have witnessed new tensions ever since Israeli forces introduced restrictions on the entry of Palestinian worshipers into the al-Aqsa Mosque compound in East Jerusalem in August 2015.

More than 300 Palestinians have lost their lives at the hands of Israeli forces in the ongoing tensions since the beginning of October 2015.

The Tel Aviv regime has tried to change the demographic makeup of Jerusalem over the past decades by constructing settlements, destroying historical sites and expelling the local Palestinian population. Palestinians say the Israeli measures are aimed at paving the way for the Judaization of the city.

The al-Aqsa Mosque compound is a flashpoint Islamic site, which is also holy to Jews. The mosque is Islam’s third holiest site after Mecca and Medina in Saudi Arabia.