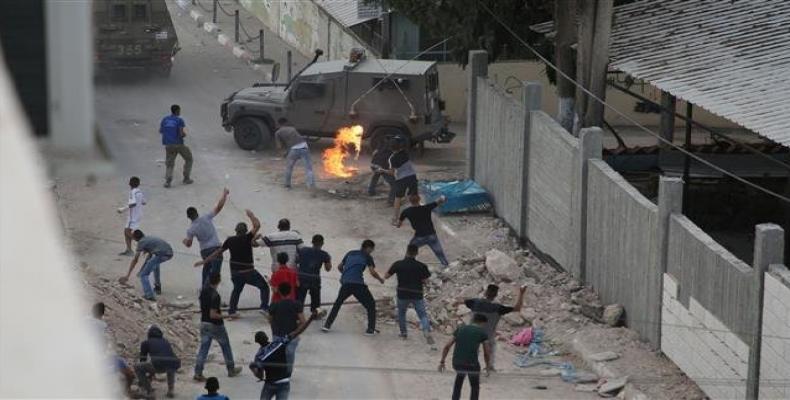 Israeli soldiers, police forces and officers from the internal spy agency Shin Bet broke into Palestinian houses in the village of Shuwaykah, north of Tulkarm, the Israeli military reported.  The Israeli military confirmed in a statement that soldiers had “arrested” an unspecified number of people while a manhunt for the suspected gunman behind the alleged incident was still underway.

The raid came after a Palestinian man allegedly shot dead two Israelis and wounded a third one in the Barkan Industrial Park, located about 25 kilometers east of Tel Aviv on Sunday.

Ashraf Naalwa, 23, has been named by the Israeli army as the Palestinian behind the Sunday attack.  A spokesman for the Shin Bet said they had arrested Naalwa's brother, while his sister was "detained, questioned and released."

Meanwhile, angry Palestinian protesters engaged in clashes with Israeli forces in Shuwaykah village, throwing stones and Molotov cocktails at them.  They said Israeli soldiers looted the houses at gunpoint.

In recent months, Israeli forces have frequently raided the houses of Palestinians in the West Bank, arresting dozens of people, who are then transferred to Israeli prisons, where they are kept without any charges.

The occupied Palestinian territories have been the scene of heightened tensions since August 2015. The tensions were triggered by an Israeli move to imposed restrictions on the entry of Palestinian worshipers into the al-Aqsa Mosque compound in East Jerusalem.  Palestinians say the Tel Aviv regime seeks to change the status quo of the sacred site.

Tensions have also been running high in Gaza since March 30, which marked the start of a series of protests, dubbed “The Great March of Return.” Palestinian protesters demand the right to return for those driven out of their homeland.  Nearly 200 Palestinians have been killed by Israeli forces since the return rallies began.