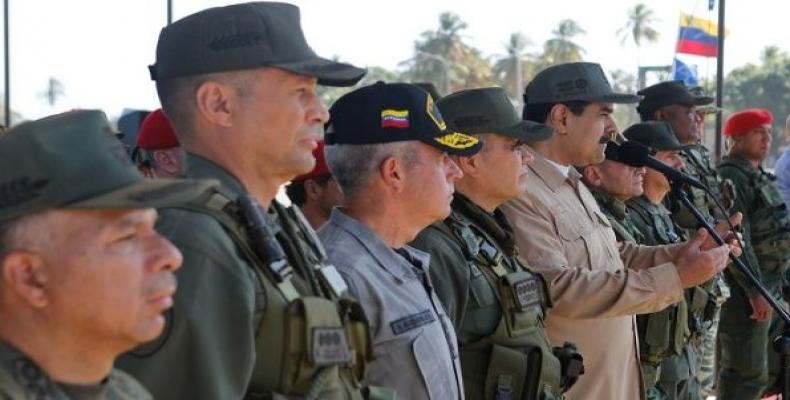 Caracas, January 29 (RHC)-- Defense Minister of Venezuela Vladimir Padrino López reiterated his support for democracy and for the government of Nicolas Maduro, saying that the Bolivarian National Armed Forces (FANB) has only one president -- the one elected by a majority vote in the elections of May 2018.

"We do not have three options, nor do we have three presidents or two presidents.  We have only one president.  He is the constitutional president elected by the vast majority of Venezuelans in direct, democratic and secret ballots, just as our constitution and laws mandate," he said in reference to Nicolas Maduro.

Padrino Lopez led military exercises with different brigades from Caracas.  The defense minister, a recognized military officer with the rank of Chief General, also denounced the strategy the right-wing opposition uses to divide the FANB as "childish politics" and affirmed that they will be unsuccessful.

"The erratic policy of the ultra-right opposition has done a lot of damage and has offended the military family.  Now they try to deceive us with fallacious attempts that do not make any sense," the minister said, noting that the military is "very aware" and that "every attempt to intimidate and divide the Armed Forces brings us closer together, unites us more."

"We are waiting for those violent actors, the mercenaries, and whomsoever wants or intends to interfere with the Bolivarian Republic of Venezuela," he said.