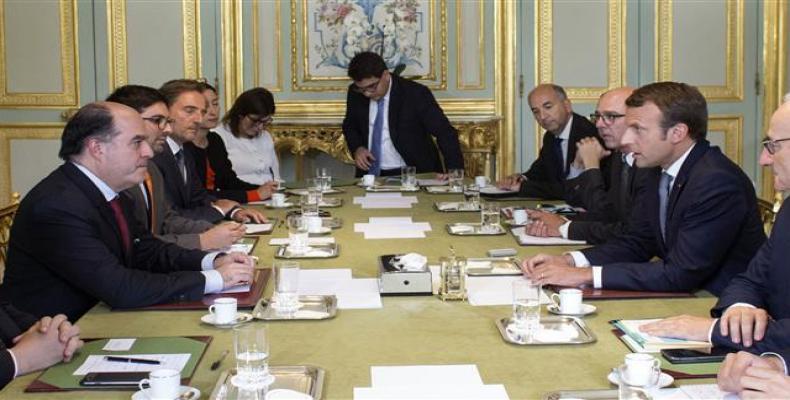 Paris, September 5 (RHC)-- French President Emmanuel Macron has held talks with Venezuelan opposition leaders who are on a European tour aimed at obtaining support for regime change in Caracas.

Macron received the Venezuelan opposition delegation at the Elysee presidential palace in Paris on Monday.  Hours after the meeting, Macron’s office issued a statement, suggesting that he was prepared to press for European sanctions against the administration of Venezuelan President Nicholas Maduro.  He did not, however, offer any details as to what actions he had in mind.

Earlier in the day, Venezuelan Foreign Minister Jorge Arreaza said he had filed complaints with the ambassadors of France and three other European countries planning to meet with the Venezuelan opposition figures during their European tour for interference in the nation’s internal affairs.

“These types of expressions are absurd and offensive to the functioning of Venezuelan democracy and its institutions,” Arreaza said.

The President of Venezuela’s National Assembly Julio Borges and the legislature’s first vice president Freddy Guevara are planning meetings this week with other European leaders, including Germany and Spain.