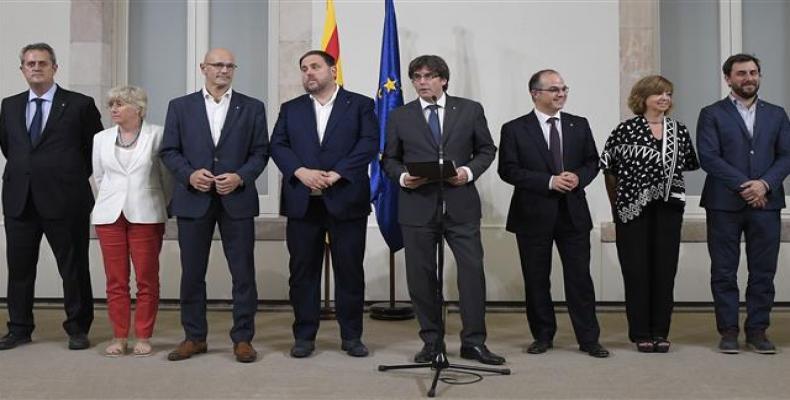 Barcelona, September 7 (RHC)-- The regional government in Spain’s prosperous Catalonia region has officially confirmed October 1st as the date for a referendum for independence in open defiance of Madrid.  Catalan legislators voted for a disputed bill on the referendum and its date late on Wednesday.  Regional President Carles Puigdemont then signed a decree confirming the date of the plebiscite.

“The concept of a state and patriotic unities that go beyond the rights of citizens don’t have a place in today’s Europe,” Puigdemont said in a speech shortly after the parliament vote.  "Catalonia belongs to this world that looks forward, and that’s why it will decide its own future on the 1st of October,” he added.

The central government in Madrid has repeatedly made it clear that any referendum on independence would be illegal.  The country’s Constitutional Court ruled last year that the bill on the referendum in Catalonia’s regional parliament was unconstitutional.

However, Puigdemont’s entire cabinet, which is comprised of politicians from various pro-independence parties, also approved the decree in an attempt to dilute responsibility in case of prosecution.

In November 2014, a symbolic referendum on independence was held in Catalonia. In the vote, which was not binding, more than 80 percent of the 2.3 million people who cast ballots backed independence for Catalonia, according to Catalan officials.

Many in the wealthy region, which provides almost a fifth of the Spanish economic output, have been wishing greater autonomy from Madrid in recent years.  They argue that Spain’s recent economic downturn is making Catalans pay more taxes to the central government to subsidize poorer regions. The highly-industrialized region has its own language and customs.