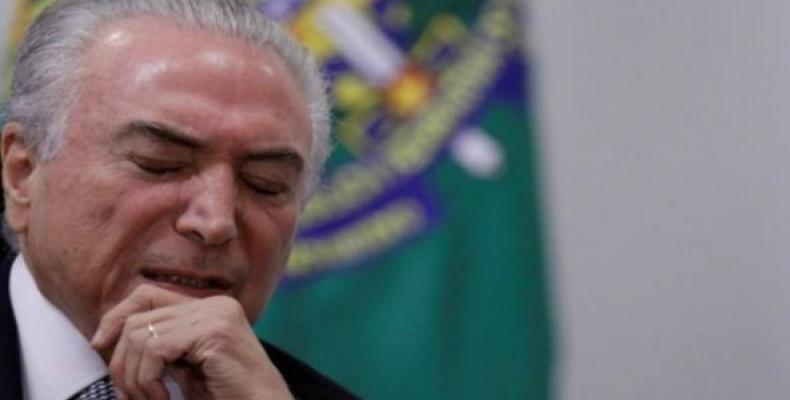 Brasilia, October 18 (RHC)-- Brazilian President Michel Temer may face crimes of corruption, money laundering and criminal association after federal police recommended the opening of a new case, according to the Associated Press.

After a year of investigations, police officials say there are strong implications indicating Temer may have been receiving bribes via the Brazilian Democratic Movement (MDB) party and abusing his authority to favor certain port administrative companies.

The report also implicates his daughter, Maristela, as well as 11 others including Colonel Joao Baptista Lima and his wife Maria Rita Fratezi.  The document suggests the president may also have been receiving bribes through the number of real estate reforms like those conducted in his daughter's house.

The full report was filed in Brazil's Supreme Court and recommended the Supreme Court "block assets" of all those under suspicion as well as hold four in preventative detention.  However, the Federal Supreme Court (STF) said that it will await the Public Prosecutor's decision before conducting any arrests or blocking funds.

Both the Attorney General and Congress will have 15 days to decide whether or not to pursue the case which could cause the president’s suspension in the final two months of his term.

Past corruption allegations leveled at the president have been dismissed by lawmakers or postponed until January 1, 2019.  The president’s attorney states he has been given access to the report.