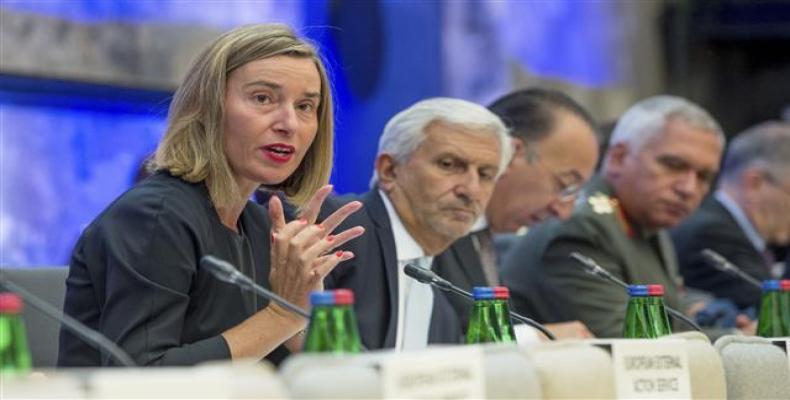 London, October 12 (RHC)-- Iran is considering “various scenarios” in response to U.S. President Donald Trump’s “probable withdrawal” from the international nuclear deal between Tehran and six world powers.  The Head of the Atomic Energy Organization of Iran (AEOI) Ali Akbar Salehi made the remarks on Wednesday following a meeting with UK Foreign Secretary Boris Johnson in London.  Iran has “prepared itself for various scenarios,” and will undoubtedly deliver a proper response, Salehi stated.

Donald Trump’s administration, which took over a year after the nuclear agreement had come into force, has repeatedly attacked the agreement and desperately sought a pretext to scrap or weaken the deal.  While the Trump administration has twice certified Iranian compliance with the deal in notifications to the US Congress under an American law, the White House has indicated that a third verification — due later this week — would not be offered.

Salehi went on to say that Iran hopes the nuclear agreement, known as the Joint Comprehensive Plan of Action (JCPOA), will remain as it has until today and "be rid of irrational games.”  “The European Union has so far indicted that it is willing to preserve the JCPOA but whether or not it can resist the US is unpredictable,” he added.

The head of the Atomic Energy Organization of Iran stressed that Iran seeks preservation of the JCPOA “but not at any price.”  He said: “There are only two cases: either all [parties] withdraw from the JCPOA or everyone stays [committed to] to it. There is no third alternative."  He further noted that the U.S. appears to be suffering from “political confusion” and it does not know want it wants.

Earlier in the Wednesday, the UK Foreign Office released a statement reiterating Britain’s support for the JCPOA.  “The UK supports the deal and stresses the importance of all parties continuing to uphold their commitments,” Foreign Minister Boris Johnson said in the statement.  "I remain steadfast in my view that the nuclear deal was an historic achievement… It was the culmination of 13 years of painstaking diplomacy and has increased security, both in the region and in the UK. It is these security implications that we continue to encourage the US to consider,” he added.

While the International Atomic Energy Agency (IAEA) has on multiple occasions confirmed Iran’s compliance with its commitments under the nuclear deal, the Donald Trump administration itself has not been able to point to a single area in which Iran is in breach of the terms of the agreement.

Political observers have warned that any unilateral action by the United States based on unsupported claims of Iranian non-compliance would isolate Washington, impede future efforts for other nonproliferation agreements in the broader international community and increase the likelihood of a wider conflict in the Middle East.

After the leaders of the European signatories to the JCPOA -- the UK, France and Germany -- could not convince Trump of the dangers of killing Iran’s nuclear deal during their one-on-one sessions with the U.S. president at the UN General Assembly in mid-September, the countries are now focusing their lobbying efforts on the U.S. Congress.

Observers say even if Congress decides to re-impose the sanctions, a dispute resolution process provides another month before the U.S. makes it clear that it is no longer a party to an agreement accepted by its key allies, the rest of the UN Security Council and Iran.