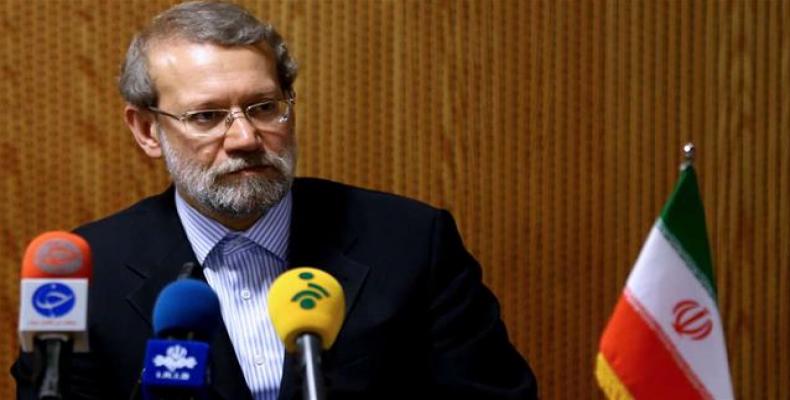 St. Petersburg, October 13 (RHC)-- Iran's parliament speaker says unilateral moves by the U.S. with regard to the 2015 nuclear deal, known as the Joint Comprehensive Plan of Action (JCPOA), will only harm Washington, because the international community is unanimous on supporting the accord.  Ali Larijani made the remarks in a press conference before leaving Tehran for the Russian city of St. Petersburg to attend the 137th Assembly of Inter-Parliamentary Union.

He said there was international consensus on maintaining the JCPOA, which was reached between Iran and the P5+1 group of countries — including the U.S., Russia, China, France, and Britain plus Germany — in July 2015.  “European countries have emphasized their position for maintaining the JCPOA and, in fact, there is some sort of consensus at international level in this regard, but only one country has taken a unilateral approach and this unilateralism will be to its detriment,” he said.

Touching on U.S. President Donald Trump’s hostile stance on the nuclear deal, the top Iranian parliamentarian said the Islamic Republic had already prepared itself for different scenarios.  “There is no urgency among Iranian authorities and we have also found solutions for any possible situation,” he said, adding that Trump’s stance reflected his “immaturity.”

“I have information that positions taken by European countries, Russia and China for preserving the JCPOA are similar to that of Iran and these impromptu moves and imprecise behavior by the Americans in this regard are problematic both for themselves and other countries.”  The administration of Trump, which came to office in 2017 and one year after the JCPOA came into force, has repeatedly attacked the deal.  Most recently, Trump called the accord "incompetently drawn" in an interview with Fox News.

While the Trump administration has twice certified Iran's compliance with the deal in notifications to U.S. Congress, the White House has indicated that a third certification would not be offered.  If Trump refuses to certify, U.S. Congress will have 60 days to decide whether to restore the sanctions against the Islamic Republic that Washington has agreed to waive under the nuclear deal.

By potentially re-imposing the sanctions, the U.S. would be stopping the implementation of major obligations under the agreement, which would practically be equal to a pullout even if an official declaration of withdrawal is not announced.

Elsewhere in his remarks, the Iranian parliament speaker noted that the countries, which oppose the U.S., argue that “the JCPOA is an international agreement and endorsed by a resolution passed by the UN Security Council.  In fact, the JCPOA is part of that resolution and outside the purview of any single country.”

Under the deal, which has been endorsed by the UN Security Council Resolution 2231, Iran undertook to apply certain limits to its nuclear program in exchange for the termination of all nuclear-related sanctions against Tehran.  The Iranian parliament speaker is set to attend the 137th Assembly of Inter-Parliamentary Union.  In addition, Larijani is expected to hold bilateral meetings with other participating countries’ parliament speakers during his visit to St. Petersburg.