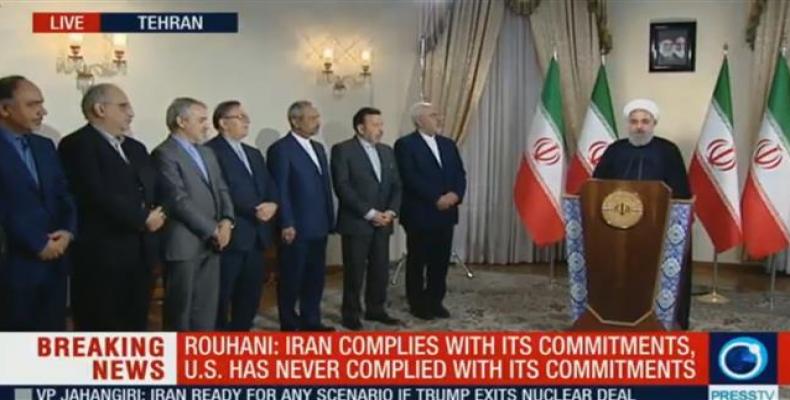 Tehran, May 9 (RHC)-- Iranian President Hassan Rouhani says Tehran will stay in the JCPOA with other signatories, stressing that Iran has always complied with its commitments to the deal, while the U.S. has never complied with its requirements.

Rouhani made the remarks on Tuesday shortly after U.S. President Donald Trump announced his decision to withdraw from the Joint Comprehensive Plan of Action (JCPOA.)

While emphasizing that Trump's decision was a historical experience for Iran, Rouhani noted that the U.S. president has a history of undermining international treaties.

"Trump's decision was the beginning of a psychological war against Iran, our heroic people will not be affected by this psychological attack," said Rouhani.  Rouhani also noted that the Iranian Foreign Ministry would be negotiating with European countries, Russia, and China in the coming weeks.

Foreign Minister Mohammad Javad Zarif responded to Trump's move, referring to it as "unlawful," while adding that the outcome of further diplomatic efforts will determine Iran's response.

The European Union, France, the United Kingdom, and Germany have expressed regret over Trump's decision about the deal.  The European Union's diplomatic chief Federica Mogherini says the bloc is "determined to preserve" the Iran nuclear deal.   On the other hand, joining the U.S. and Israel, Saudi Arabia says it "supports and welcomes" U.S. President Donald Trump's decision to pull out from the Joint Comprehensive Plan of Action.

Russia and China, as the other signatories to the JCPOA, have warned against efforts to scrap the landmark accord and pledged to continue to honor their commitments under the deal.

The International Atomic Energy Agency has been monitoring Iran's compliance with its commitments under the JCPOA and has consistently verified the Islamic Republic's compliance.

Iran has always insisted that its atomic program is merely for peaceful purposes and that the West is using the nuclear case as a pretext to put pressure on Tehran.