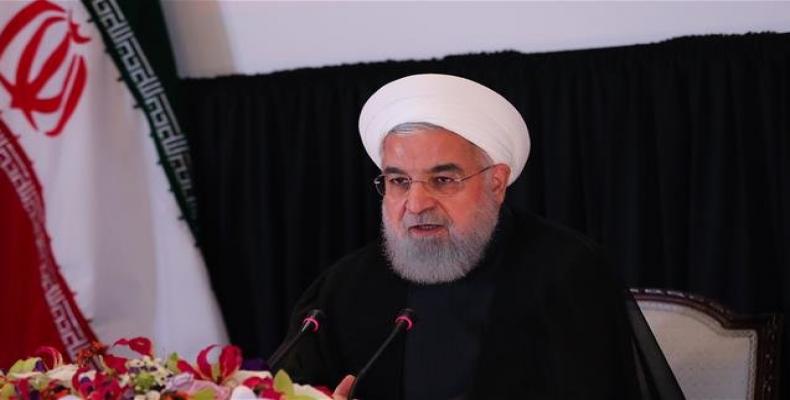 “At the UN General Assembly, we witnessed that the great majority of world leaders endorsed the JCPOA as a diplomatic achievement, which means that the U.S. has been left isolated,” Rouhani said at a new press conference on Wednesday.  He noted that Washington's decision to withdraw from the JCPOA was not agreed upon by other countries.  “Except for few countries, others regarded the measure as a political mistake,” he said.

Rouhani said that the U.S. should either rectify its mistake or continue with this wrong process.  But the US will learn from its mistake sooner or later and will return to the deal, he noted.

The Iranian chief executive warned that the US’s measures were in the interests of neither its own people nor others.  Rouhani said that Iran was in contact with its fiends, including the European Union, to find channels to keep economic transactions and to support foreign companies doing business in the country.

During the Security Council meeting, Trump threatened that any individuals or entities that fail to comply with Iran sanctions will “face server consequences” and stressed that the US will ensure Iran will never get a nuclear bomb.  He also said that the US will pursue tougher Iran sanctions, “tougher than ever before,” and defended re-imposing sanctions on Iran, citing its "malign conduct."

Defying Trump, European leaders stood by the Iran nuclear deal at the UNSC meeting.  French President Emmanuel Macron said that sanctions and containment were not solutions to the Iranian issue.  He said that Iran has lived up to its commitments under the JCPOA, and so should other signatories to the deal.

British Prime Minister Theresa May also defended the JCPOA as an “important” achievement, and stressed that her country will be committed to preserving the agreement as long as Iran lives up to its commitments.

The UN Security Council meeting came one day after Trump used his address to the 73rd session of the General Assembly on Tuesday to attack Iran, and promised hard-hitting sanctions against Tehran while urging the world to isolate the Islamic Republic.

When he took the podium hours later, Rouhani responded to Trump’s anti-Iran remarks.  He accused the current US administration of violating the rules of international law by withdrawing from the 2015 nuclear deal that Iran signed with six world powers, including the US.

The Iranian president also emphasized that the U.S. is pushing other countries to violate the Iran deal and that it is threatening all countries and international organizations with punishment if they comply with Security Council Resolution 2231, which endorsed the JCPOA.