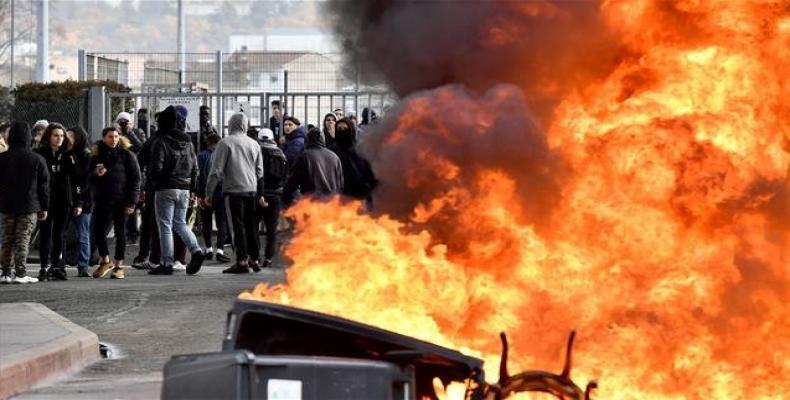 Paris, December 5 (RHC)-- French students disrupted classes on Tuesday in several parts of France amid protests against education reforms by the government of President Emmanuel Macron.

Nearly 100 schools were fully or partially blockaded in the southern city of Toulouse and Creteil in the Paris area.  The angry protesters clashed with anti-riot police, torching vehicles and damaging buildings. Officials say part of a high school near Toulouse was set on fire.  Violence was also reported in the cities of Bordeaux and Marseille.

Seven teenagers were arrested after riot police were called to Jean-Pierre Timbaud high school in Aubervilliers in the northern Paris suburbs, where a car was overturned and trash bins were set on fire.

The protesters demand Macron’s resignation and are opposed to changes in the college and university system.  Protesting students also supported the so-called Yellow Vests movement against high living costs.

Protests against fuel tax have expanded to include unpopular education changes and the working conditions of unhappy ambulance workers.

On Tuesday, 11 fuel depots across France were blockaded by protesters and shut. Over 70 service stations had run out of fuel and restrictions were in place in Brittany on how much fuel motorists could buy.

An 80-year-old woman died in Marseille on Monday after she was hit by a police tear gas grenade on Saturday. She was inside her flat and opened her windows to close her shutters when she was hit by the grenade as police confronted protesters.  She died in a hospital after surgery.

Three other people have been killed in the protests since demonstrations started more than two weeks ago.

An opinion poll for Harris Interactive taken after Saturday’s violence in Paris found 72 percent of French people still supported the protest movement, which began last month in response to a rise in taxes on fuel.

Macron’s latest rating matches the low standing by his predecessor Francois Hollande in late 2013, according to Paris Match. Hollande at the time was considered to be the least popular French leader in the nation’s modern history.