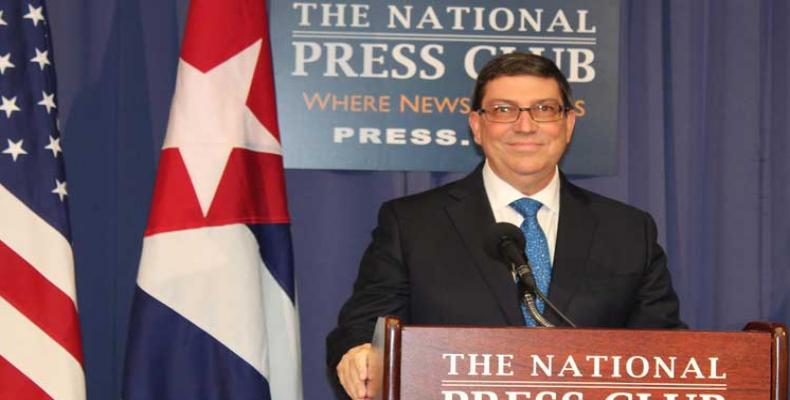 Washington, November 3 (RHC)--Cuban Foreign Minister Bruno Rodríguez said the Trump Administration is using the alleged health problems of staffers of the U.S. embassy in Havana as a pretext to create "significant setbacks" in Cuban-American relations and urged it to tell the truth.

Speaking at a press conference in Washington on Thursday, Rodriguez blamed the U.S. for politicizing the situation and categorically denied the occurrence of any sonic attacks.

The State Department has said that 24 Americans have been affected by mysterious attacks that cause a range of symptoms including permanent hearing loss, loss of balance and dizziness, cognitive issues, and, in some cases, from mild traumatic brain injury.

The Cuban Foreign Minister stated that the results of the Cuban investigation of the allegations are conclusive and that the U.S. must tell the truth.

"I can categorically affirm that those that say there have been attacks ... are deliberately lying.  If the U.S. government thinks otherwise, I invite it to present evidence." he said.

Rodriguez did not deny that American personnel may be experiencing symptoms and said his government is willing to continue the investigation to "find the truth."

The foreign minister said that in an unprecedented step, Cuba allowed   FBI teams to visit the island four times and that so far they had "not presented any conclusion or any hypothesis as to what had happened or any specific incident."

The lack of a device has left Cuba suspicious, and Rodriguez said that no weapon or device could be the cause of all the reported symptoms.

"So far, I can confirm conclusively, those health problems cannot be the result of a single cause or single action," he said.

The Cuban Foreign Minister urged the U.S. to share medical records and more specific details or convene Cuban and American doctors and investigators, so that his government can better understand the situation.

During the press conference  he also accused the U.S. government of hypocrisy, questioning why U.S. authorities requested "212 visas for relatives and friends of diplomats between January and October" or "made more than 250 pleasure trips outside Havana" if the country is so unsafe.