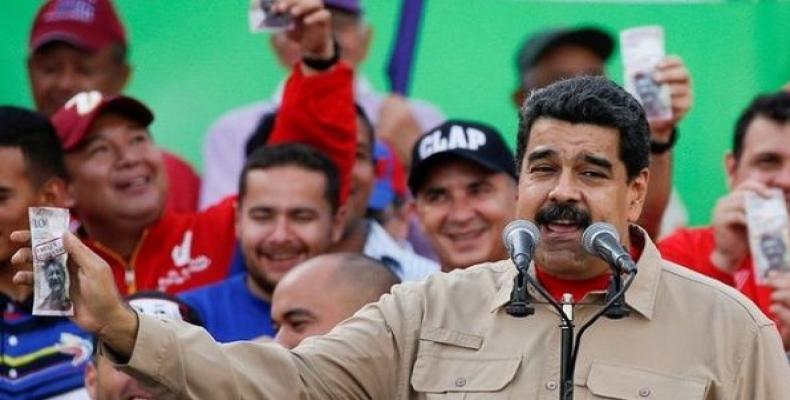 Caracas, November 3 (RHC)-- Venezuelan President Nicolas Maduro has criticized his Colombian counterpart, Juan Manuel Santos, for directing attacks aimed at Venezuela's national currency by allowing the trafficking of Bolivar notes in the neighboring country.  "Juan Manuel Santos directs an attack against the Venezuelan economy with the mafias of Cucuta, with the mafias of Maicao, I speak of mafias operating against the Venezuelan currency,” Maduro said, adding that “they steal the currency, the 50 note, the 100."

During a Council of Ministers meeting, the head of state noted that since 2016 the Bolivarian government has struggled arduously to stabilize the national currency despite measures implemented by the United States to destabilize the country.  Nevertheless, he revealed that several managers at Venezuelan private banks have been detected trafficking national currency along the Colombian border.  "We've caught managers of private banks taking trucks filled with notes to the border to sell them to the mafias of Juan Manuel Santos in Colombia.  It's Juan Manuel Santos who directs these perverse mechanisms against Venezuela, but we've defeated him and we'll continue to defeat him,” Maduro insisted.

The Venezuelan president indicated that in spite of calls to use the electronic payment system, hard currency and the mechanisms supporting the physical monetary system is necessary and continues to flourish on the streets.  Maduro also invoked the memory of late President Hugo Chavez, thanking him for his support of peace negotiations between the Revolutionary Armed Forces of Colombia and the Colombian government, which resulted in a peace agreement last year.  “Had it not been for Chavez and myself, there wouldn't have even been a (peace) agreement,” adding that the only accomplishment Santos' government can take credit for is “social destruction.”