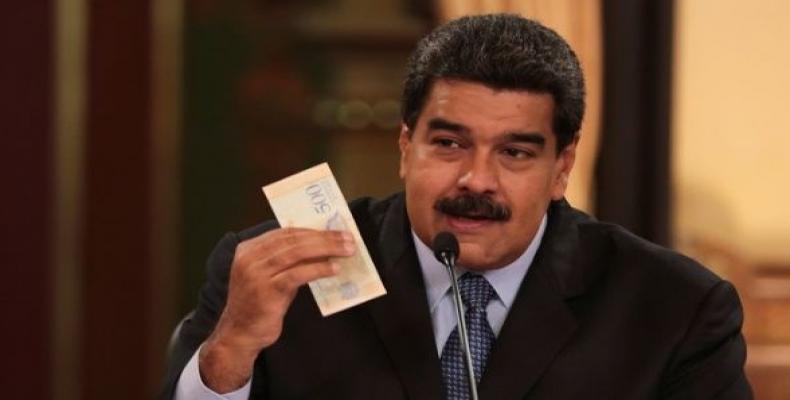 Caracas, August 21 (RHC)-- The monetary measures announced by the Venezuelan government, as part of the Recovery, Growth and Economic Prosperity Program, went into effect Monday, as the circulation of the new currency began around the country.

The new Venezuelan currency known as the Sovereign Bolivar, has five fewer zeros compared to the current Bolivar, which will coexist for retail operations or smaller amounts.

Venezuelan President Nicolas Maduro said that Monday, which was declared a public holiday so citizens could adapt to the new monetary reforms, the government would begin the "monetary reconversion and integral economic reconversion."

On his Twitter account, President Maduro said that the date is a "turning point" for Venezuela, due to the economic circumstances.  "We are going to dismantle the perverse war of neo-liberal capitalism to install a virtuous, balanced, sustainable, healthy and productive economic system in Venezuela."

These measures are supplemented by a new redesign of fiscal and tax policy, a new policy of subsidizing gasoline, an increase of four percentage points to the Value Added Tax (IVA),  and the establishment of a single exchange rate, which will fluctuate according to the Dicom auctions under Venezuelan Central Bank (BCV) regulation.

The economists Tony Boza and Elio Córdova indicated that the measure of anchoring the Sovereign Bolivar and salaries to the Petro seeks to avoid the depreciation of the monetary currency and protect the purchasing power of the Venezuelans.

In an exclusive interview with teleSUR, both specialists pointed out that the governmental objective is to stop the imbalance, a product of the economic war, induced from abroad.  The outstanding offer of the Sovereign Bolivar will be subject to the amount of Petros available and would act as a conversion box.  At the same time, it will be associated with the value of the price of Venezuelan oil, according to the state news agency AVN.

Each unit of the cryptocurrency will be the equivalent to 3,600 Sovereign Bolivars and will be the reference to fix the value of work, the price of services and consumer goods, as one of the accounting units that will govern the Bolivarian nation.