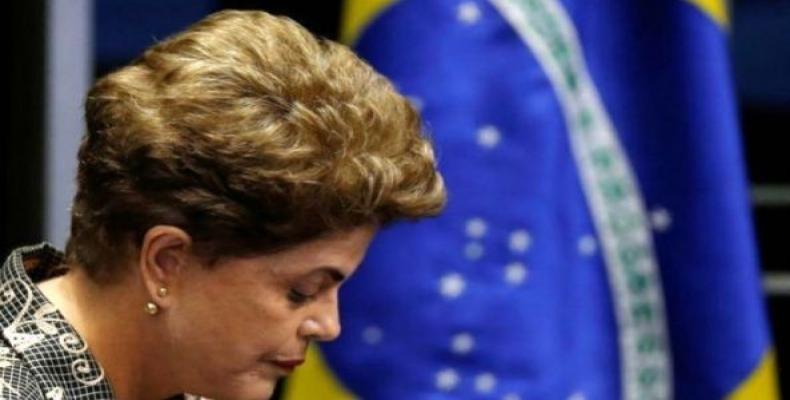 Brasilia, November 7 (RHC)-- Former Brazilian President Dilma Rousseff has taken to Twitter to remind followers of the misogynystic fervor accompanying what she has vehemently refered to as the 2016 “coup,” which saw her removal from office.  “Dilma is a harsh woman, men are firm; Dilma is emotionally unstable, men are sensible," she tweeted.

“I was (considered) 'obsessive-compulsive with work,' men are dynamic and hard-workers.  The misogyny game is well employed by those who use it,” she added.  The former head of state also pointed out that some advisors, fearing that she would be disrespected and personally afflicted by her accusers, insisted that she not attend the Senate debate and vote that would consecrate her impeachment last year.

“I made a huge effort not to allow it to diminish, paralyze or torment me,” she wrote, adding that an internal private campaign played a significant role in her removal from office.

Earlier this year, Brazil's Datafolha survey institute released a study entitled, "Visible and Invisible: The Mistreatment of Women in Brazil." It revealed that roughly 12,000 women are victims of some form of violence each day in Brazil.  Each and every hour, some 503 women are victims of a moral offense, physical violence or unwanted touching. Two out of three Brazilians have witnessed these acts and other forms of aggression against women.  The most common form of harassment, according to the survey, is disrespectful comments on the streets.

The study was commissioned by the Brazilian Forum of Public Safety and undertaken between February 11 and 17. Approximately 2,000 people were surveyed, of which over 1,000 were women.

Ben Hur Viza, a federal district judge ruling on cases of violence against women, stated that oftentimes victims don't file reports due to fear of being considered culpable or blamed for the attack.  “Why did he attack you?  Why didn't you say no or why didn't you leave the relationship if he hadn't previously attacked you?  Such questioning transfers the blame from the man to the woman,” Hur Viza said.