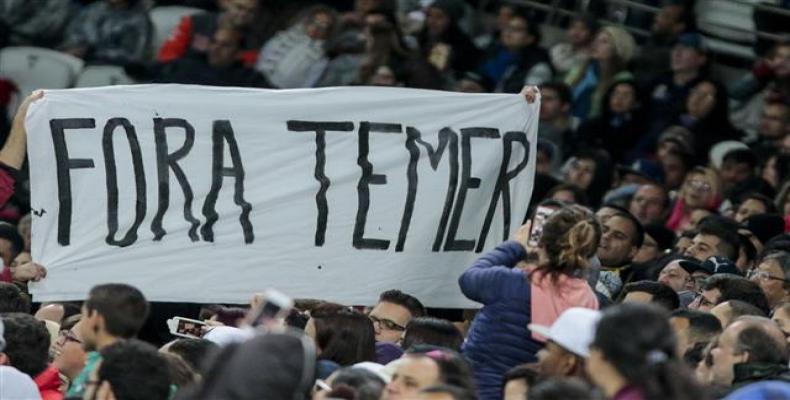 Brasilia, August 25 (RHC)-- Thousands of Brazilians have staged a demonstration in the country’s capital to show support for suspended president Dilma Rousseff, whose impeachment trial began on Thursday.

The protesters held banners and placards reading "Oust Teme," and "We don't recognize a false cabinet," in reference to Brazilian interim president Michel Temer and his administration.

Dilma Rousseff faces false charges of supposedly illegally manipulating finances to hide a growing public deficit ahead of her re-election in 2014.  The first Brazilian woman president has accused her opponents of trumping up the charges against her to remove her in a parliamentary-engineered coup.  The impeachment trial, getting underway today, is expected to last for several days.

Dilma Rousseff was among the attendees at a rally on Wednesday, telling her supporters that she would fight and resist the impeachment to the end.  She said: "I committed no crime.  To stop this happening again, I must go to the Senate to defend Brazil's democracy, the political views that I advocate and the legitimate rights of the Brazilian people."

The Brazilian Senate voted a week ago to hold an impeachment trial for Dilma, who will be given time to take the stand and defend herself on Monday, August 29th.  The chief justice of the Supreme Court, Ricardo Lewandowski, who will preside over the trial, said that if Rousseff is acquitted, she will be allowed to serve out her term until 2018.  But if it removes her permanently, then Temer will become the full-fledged president until the next election in 2018.