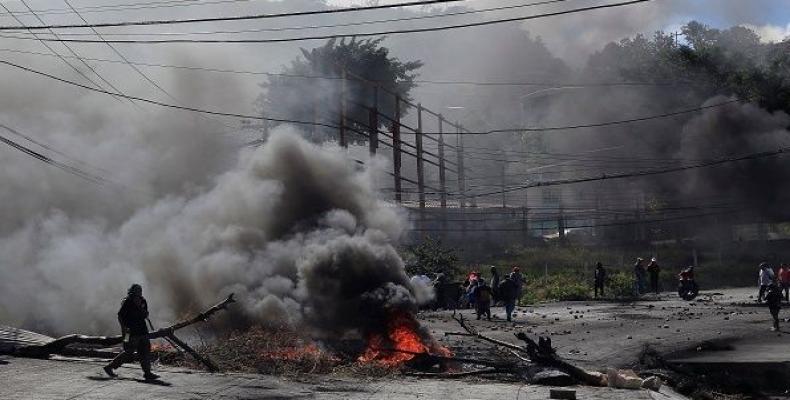 Tegucigalpa, December 2 (RHC)-- The Honduran government has suspended constitutional guarantees across the country, just hours after President Juan Orlando Hernandez reportedly fled the country to avoid street protests in the wake of the disputed presidential election.

According to el Diario La Prensa, the government has also implemented a curfew to stop public demonstrations.  The move was announced on television and radio networks across Honduras by Ebal Diaz, secretary of the Council of Ministers, in a bid to control violence which has erupted across the country due to ongoing delays in publishing the results of last Sunday's election.

Honduras’ Opposition Alliance candidate Salvador Nasralla earlier said President Hernandez had fled to the United States ahead of a plan to announce a state of emergency in the Central American country.

The embattled president has gone "allegedly to the United States: what could he be doing there?  We don't know yet," Nasralla said in a three-minute Facebook video posted late Friday, citing information received from his personal "intelligence service."

"Here in Honduras, we are in a situation of fraud against me," the opposition leader continued.  "I won the elections with 70 percent of the vote, with 116,000 more votes than Hernandez.  "Mathematically, it is impossible that this would change even with the 30 percent of the ballots left to count."

Protesters, meanwhile, are being attacked by the National Police with tear gas and rubber bullets.  So far, three people have been killed during demonstrations and dozens more injured.

On Friday, the President of the Supreme Electoral Tribunal (TSE) David Matamoros reported that the "special scrutiny" of electoral records was being further delayed.  Matamoros blamed the delay on the fact that the opposition Alliance delegates arrived late to start the special count, noting that representatives of the National Party and international observers were already present.

The Alliance said they were refusing to take part because the TSE had only agreed to scrutinize 1,300 ballots out of the 5,000 originally requested.

Matamoros announced Thursday that the electoral body will count the remaining 1,031 ballot records under the "special scrutiny" of international organizations in order to "guarantee transparency."

Groups overseeing the count include the European Union Parliament Electoral Observation Mission in Honduras (EUPEOM), and the Organization of American States (OAS).

The armed forces of Honduras have also appealed for the general population to remain calm as the delayed results of last week’s presidential elections trigger increasingly violent protests.  Voters have taken to the streets to demonstrate their anger at the ongoing delays amid widespread accusations of fraud committed by the country’s electoral body.

Jorge Cerrato, spokesman for the armed forces, released a statement Friday in which he called on Hondurans to maintain "peace, calm and tolerance" as tensions continue to escalate.   "The Armed Forces and the National Police... call on the population to maintain peace, calm, tolerance and not to feed feelings of hatred, revenge and division among the Honduran family," he said on Twitter.

"We recognize that the Honduran people have all the right to demonstrate as mandated by the Constitution of the Republic, peacefully without affecting the free movement, physical integrity of people or property."

The TSE has repeatedly delayed the scheduled release of the results, prompting public displays of anger which are being increasingly met with police violence.

Cerrato insisted that security forces are in the "post-election phase," faithfully guaranteeing the provisions of electoral law and political organizations, but he cautioned that anyone "inciting and executing acts of vandalism that generate chaos, disorder and destruction," will be prosecuted "respecting human rights in an unrestricted manner."