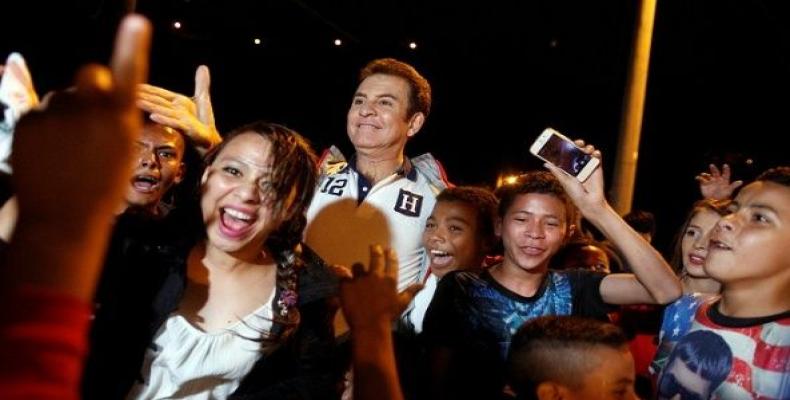 Tegucigalpa, Feb 27 (RHC)-- Former Honduran President Manuel Zelaya and opposition leader Salvador Nasralla had called for protests outside of the Honduran maximum security prison -- Santa Barbara -- in order to free the political prisoners that are being detained there for protesting the controversial re-election of President Juan Orlando Hernandez (JOH), but have now postponed those plans.

In a tweet, Zelaya says, "JOH has demonstrators against the (electoral) FRAUD in jail."  The former president says there are 11 people locked up in "The Well," as Santa Barbara is known, and two more are in another maximum security prison in the province of El Paraiso.  Both prisons are reserved for those who commit high-level crimes and prisoners are often placed in solitary confinement without any light for 23 hours a day.

The Committee of Family Members of the Detained and Disappeared in Honduras (Cofadeh) reports that between November 28th and December 30th alone, the police and military detained over one thousand Nasralla supporters during massive and frequent protests against the allegedly fraudulent elections that took place November 26th, which placed incumbent JOH back in the presidential palace.

It’s unclear how many more opposition protesters have been incarcerated in the more than three months of large-scale protests since Hondurans went to the polls, or how many, if any, have been released.

After the president canceled visitor privileges to the prison in light of the announced protests, Zelaya called off the Santa Barbara protests.

In a tweet, Zelaya said: "URGENT / MOBILIZATION POSTPONED the WELL @SalvadorAlianza.  JOH ordered the cancellation of family visits of prisoners to torture the detained and blames the ALLIANCE" (sic, emphasis original).  Souza said in a press conference that, "Nasralla and Zelaya are aligned with gangs … declaring that their intention is to liberate those who are facing charges of looting, burning police stations, robbery and hurting the police."

The functionary went on to say the opposition "is looking to free high-risk criminals aligned to (Nasralla) so they can go back to blocking streets, … looting, and threatening people with war."

Nasralla and his supporters assert that JOH "stole" the elections from him.  He and the Organization of American States secretary general were calling for new, clean presidential polls because the Nov. 26 were racked with "irregularities."  JOH’s reelection followed a first term (2013-2017) riddled with unpunished violence and allegations of corruption against the president.

In addition to the mass incarcerations, Cofadeh also found that during the month of December, 72 demonstrators were victims of police torture and 147 were seriously injured.  So far approximately 38 demonstrators have been killed by government forces during protests.