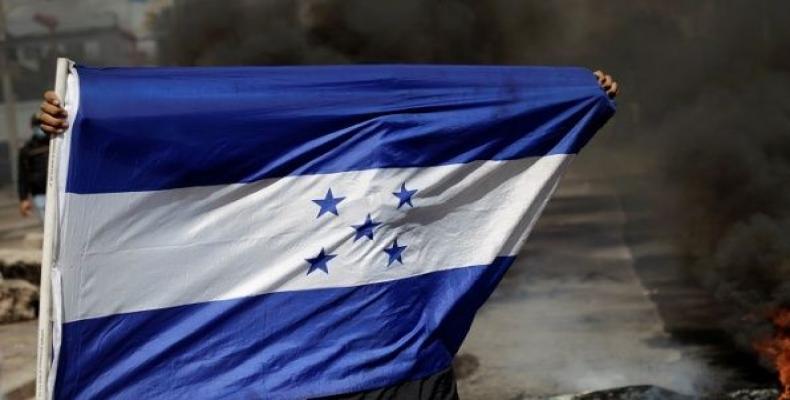 Tegucigalpa, January 29 (RHC)-- Thousands of people in Honduras blocked roads in different areas of the country, in what have been dubbed the "Red Vests" protests, a year after the inauguration of President Juan Orlando Hernández (JOH).

Groups of supporters from the Freedom and Refoundation party (LIBRE), organized by former President Manuel Zelaya, took to the streets a year after Hernandez took office in protest of electoral fraud, according to opponents.

However, what began as a day of peaceful protests turned into a confrontation between demonstrators and members of the National Police, when the latter fired tear gas at the crowds in a bid to repress the civic demonstrations.

"There are people who have been gassed and beaten" by police, former president Manuel Zelaya told a local TV station.  "People need a fair government, not a dictatorship," Zelaya told reporters on a bus with supporters in the Colonia San Miguel neighborhood of the capital Tegucigalpa.

The main ramps to different highway arteries were cordoned off by the military, while demonstrators were attacked.  Sources among the protesters denounced the intimidation tactics used by police throughout the day.

The marches carried out by the opposition in the country, are protected in Article 3 of the Honduran constitution, which states that no one owes obedience to a usurping government.  More and intensifying protests are expected in the coming weeks.

The United States recognized Hernandez as the victor of the disputed presidential elections back in 2017, allegedly because he was believed to be able to stem the flow of illegal drugs and migrants to the Texas border; however, today the Honduran exodus to the U.S. and the president’s links to drug-trafficking highlight the government’s inability to deliver on either front.

In November, the Honduran president’s brother Juan Antonio Hernandez was arrested in Miami and charged with drug trafficking, dealing a severe blow to the president's credibility.