United Nations Warns Against ‘Sleepwalking’ into War with North Korea 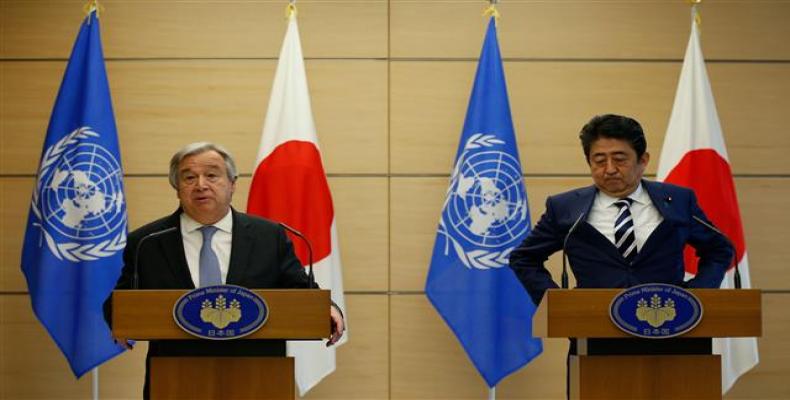 Tokyo, December 15 (RHC)-- UN Secretary-General Antonio Guterres has warned the international community against the danger of “sleepwalking” into a war with North Korea over its nuclear and missile programs.  “The worst possible thing that could happen, would be for us all to sleepwalk into a war that might have very dramatic circumstances,” said the UN chief in a joint press conference with Japanese Prime Minister Shinzo Abe in Tokyo on Thursday.

Guterres’ comments came just days after U.S. Secretary of State Rex Tillerson offered to engage in direct negotiations with Pyongyang without pre-conditions.  Apparently contradicting Tillerson, however, the White House said on Wednesday that no talks could be held with the North as long as it did not --  quote -- "improve its behavior."

In his presser, Guterres further said: “It is very clear that the Security Council resolutions must be fully implemented first of all by North Korea but by all other countries whose role is crucial to... achieve the result we all aim at, which is the denuclearization of the Korean Peninsula.”  He added that the unity of the UNSC was also vital “to allow for the possibility of diplomatic engagement” that would allow denuclearization to be carried out.

Premier Abe, for his part, said that Tokyo “fully agreed” that the denuclearization of the volatile Korean Peninsula was “indispensable” for the peace and stability of the region.

Also on Thursday, Japanese police announced that they had conducted multiple raids, reportedly in connection with alleged shipments of food to the North.  According to local media, security forces raided a Tokyo-based commercial association affiliated with the General Association of Korean Residents in Japan, known as Chongryon.  The organization, which has close ties with Pyongyang, acts as the de facto North Korean embassy in Japan, as there are no diplomatic relations between Tokyo and Pyongyang.