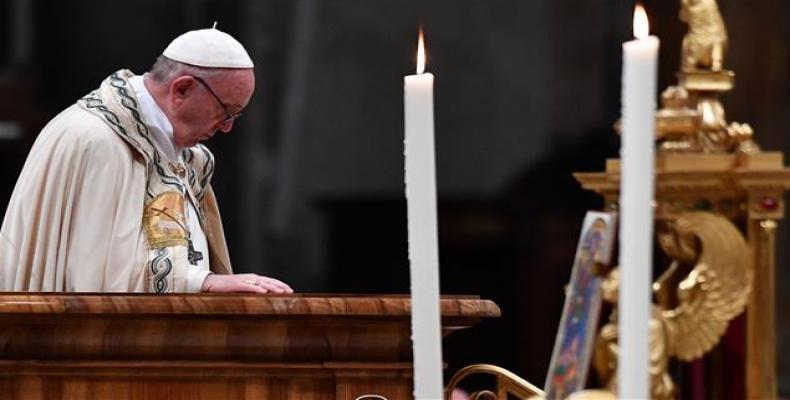 Vatican City, January 2 (RHC)-- In his year-end message, Pope Francis says 2017 was ruined by deadly wars, injustice and other man-made ills which worked to undermine humanity and the environment.

Speaking at his last public event of the year in St. Peter's Basilica at Vatican City, the head of the Roman Catholic Church said that humanity had "wasted and wounded" 2017 "in many ways with works of death, with lies and injustices."

While war was the most obvious sign of "unrepentant and absurd pride," many other transgressions had caused "human, social and environmental degradation," said the pontiff.  "We must take responsibility for everything before God, our brothers and our creation."

Pope Francis further said despite the gloom, "gratitude prevails" thanks to those who "co-operate silently for the common good."   The Pope did not highlight any of the global woes, but the leader of the world's 1.2 billion Catholics has, over the course of the year, made his voice heard on many of the world's biggest issues.

The 81-year-old Argentinean pontiff has on numerous occasions spoken out for refugees since his election in 2013.  Just a month ago, he visited Myanmar and neighboring Bangladesh to address the sufferings of Rohingya Muslims, who have been subjected to a state-sponsored ethnic cleansing campaign at home in Rakhine State.

In Bangladesh, he had an emotional encounter with Muslim refugees, during which he asked for forgiveness from the Myanmarese refugees for all the hurt and indifference they have endured.  Nearly 870,000 Rohingya Muslims have so far been forced to flee the Myanmar military's state-sponsored crackdown to Bangladesh.

In his December 25th speech last week, Pope Francis also called on the world to see Jesus in the innocent children in war-torn countries like Syria, Iraq and Yemen, where conflicts have been "largely forgotten, with serious humanitarian implications for its people, who suffer from hunger and the spread of diseases."

Last month, the Pope rebuked U.S. President Donald Trump's decision to recognize Jerusalem as the capital of Israel. He has said the status quo of the occupied city must remain unchanged, calling for negotiations between Israelis and Palestinians.  He has also been critical of Washington's decision to withdraw from the global Paris climate deal, making efforts to convince Trump to address issues related to climate change and global warming.

The pontiff even touched on the issue of North Korea's nuclear and missile program and heightening tensions between the North and the U.S. and its regional allies.