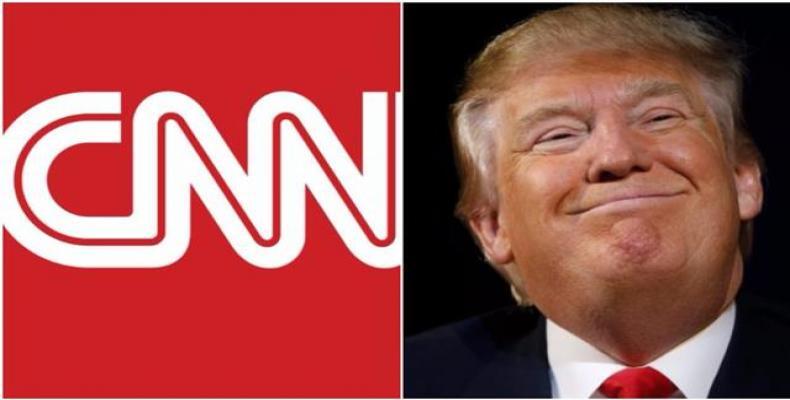 Washington, January 19 (RHC)-- The U.S. news network CNN is the uncontested winner of the much-anticipated “Fake News Awards” put together by U.S. President Donald Trump, topping the list of news outlets with 4 out of the 11 "fake news" stories cited.  The Republican president, who has put a lot of efforts into defaming the mainstream media since making his way into the White House, announced the awards in a tweet.

“2017 was a year of unrelenting bias, unfair news coverage, and even downright fake news,” read the article’s opening line.  Published on the Republican National Committee (RNC)’s website, the 11-entry list included sarcastic awards for such outlets as CNN, The New York Times, Washington Post and Newsweek.

CNN topped the list by winning four awards for “falsely” reporting on a range of issues, including the Russian investigation, Trump’s “overfeeding” of fish during his trip to Japan.  And the U.S. president insisted that his use of social media is necessary to counter "unfair" reporting.

The New York Times won two awards for predicting that the U.S. economy would “never” recover after Trump’s election victory over his Democratic rival Hillary Clinton in 2016.  Trump gave an award each to the Times, Washington Post and Newsweek for claiming respectively that he had “removed a bust of Martin Luther King, Jr. from the Oval Office”; he had failed to draw enough people to fill a Florida stadium during a rally; and that Polish First Lady Agata Kornhauser-Duda did not shake his hand during a tour of Europe.

Touting Trump’s economic and political achievements, the article claimed that “90 percent” of media reports about Trump in his first year have been negative.  Shortly after making the awards public, Trump offered praise for a faction of the media in a tweet.