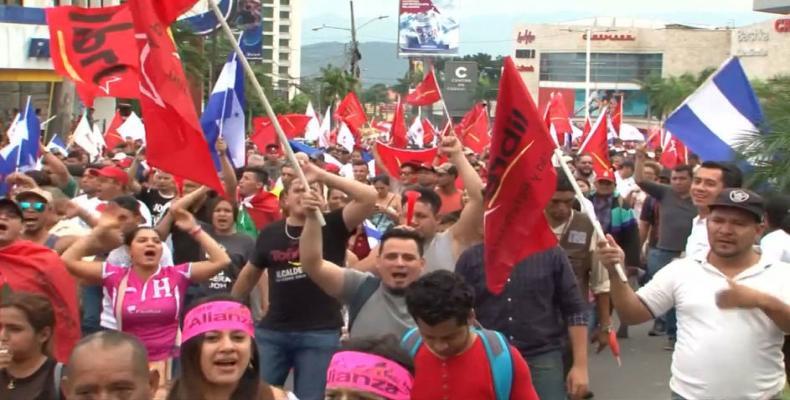 Tegucigalpa, January 20 (RHC)-- Former Honduran president Manuel Zelaya has thanked members of the National Congress for protesting the reelection of Juan Orlando Hernandez (JOH) of the National Party, who is due to be sworn in on January 27th.  Zelaya said that he respects the people that are protesting, adding: "We want reconciliation and justice, contrary to what our friends (from the National Party) say."

Members were also protesting the seating of the newest assembly members elected November 26, which continues the president's congressional majority.  “Fuera JOH!" yelled members of the Opposition Alliance coalition, including those from the LIBRE party, hoisting placards as the congressional session began.  Other members remained in their offices and refused to join the quorum.

"We can't return to a congress where we won't touch the topics that the Alliance needs to discuss," said Libre Senator Scherly Arriaga. "We declared this morning's protest because we can't dialogue with these fraudulent people."

Hernandez was finally announced president-elect December 17 by the Supreme Electoral Tribunal (TSE), the government agency charged with overseeing the electoral process in Honduras.  He was declared the winner with 42.95 percent of the votes, slightly above Opposition Alliance candidate Salvador Nasralla's 41.42 percent.

Nasralla has rejected the results as fraudulent, saying the TSE "stole" the election. International observers of the November 26 polls insist the electoral process was so riddled with "irregularities" that it was inconclusive.  Referring to the congressional protest, Zelaya said: "This wasn't a violation of the law or robbing elections. This Saturday we're going to mobilize the entire country."  Zelaya, calling for mass mobilizations starting January 20 up until Hernandez's swearing in on January 27, says the president should "investigate the truth."

"Let us open the ballot boxes, have a hearing," he said.  "Yes, Nasralla won.  Accept it."