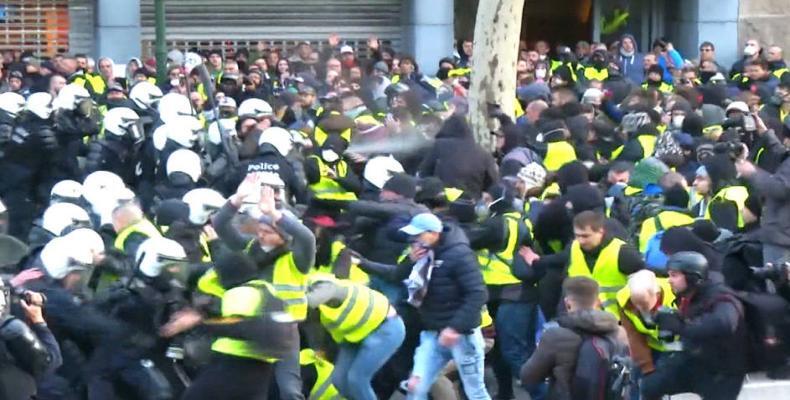 Paris, December 10 (RHC)-- In France, the “yellow vest” protests continued for a fourth consecutive week.  An estimated 130,000 people took to the streets across the country over the weekend, resulting in over 1,700 arrests.

In Paris, major attractions, including the Louvre and the Eiffel Tower, were closed in anticipation of the demonstrations.  Protesters and police clashed again in the capital and other cities with police firing rubber bullets, water cannons and tear gas at crowds, and some protesters smashing windows and setting vehicles on fire.

The French government halted plans for the fuel tax hike at the center of the protest, but demonstrators are calling for additional economic reforms, with many demanding the resignation of President Emmanuel Macron.

Meanwhile, a video has gone viral showing French high school students lined up on their knees with their hands behind their heads or their backs as police officers watch over them.  Students have been protesting plans to reform the exam system.  Some yellow vest protesters kneeled before police in Paris Saturday in a gesture of solidarity with the students.

Yellow vest protests have started in other countries, including Belgium, where around 400 people were reportedly arrested over the weekend as protesters clashed with riot squads in the capital Brussels.