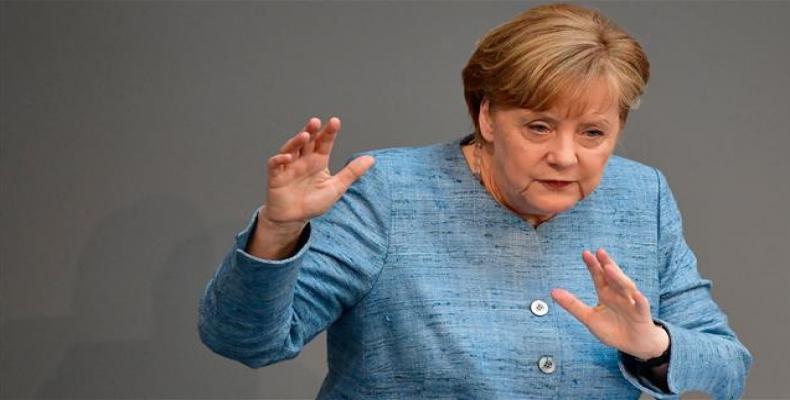 Berlin, May 17 (RHC)-- Germany has joined its European allies in reaffirming support for the Iran nuclear deal in defiance of the U.S. that pulled out of the landmark agreement last week.  German Chancellor Angela Merkel on Wednesday pushed back against Washington’s rejection of the Iran nuclear deal, and reasserted a defense of the agreement in remarks to lawmakers in the Bundestag lower house of parliament.

She also said that Iran was complying with its commitments under the deal, officially known as the Joint Comprehensive Plan of Action (JCPOA).
“This agreement is everything other than ideal, but Iran is, according to all the knowledge of the international nuclear authorities, sticking to the commitments of the agreement,” Merkel said.

U.S. President Donald Trump announced on May 8th that Washington was walking away from the JCPOA, which was reached between Iran and the five permanent members of the UN Security Council -- the United States, Britain, France, Russia and China -- plus Germany in 2015.

Trump also said he would reinstate U.S. sanctions on Iran lifted by the accord and impose "the highest level" of economic bans on the Islamic Republic.  The deal lifted sanctions in 2016 in return for Tehran limiting its nuclear program.

Iran has reiterated it would remain in the JCPOA for now, pending negotiations with the other signatories in the coming weeks before making a final decision on its future role in the agreement.  Meanwhile, Iranian Foreign Minister Mohammad Javad Zarif met EU foreign policy chief Federica Mogherini and his counterparts from Britain, France and Germany in Brussels on Tuesday.

Foreign Minister Mohammad Javad Zarif hails talks between Iran and the EU over salvaging the nuclear deal as a "good start."  Following the meeting, Mogherini told reporters that European top diplomats had agreed to follow through the Iran nuclear deal despite Trump's decision to withdraw.

To this end, the EU will launch intensive discussion at all levels with Iran in next few weeks, she said, adding that the discussion would focus on, among others, how to maintain economic relations and effective banking transactions with Iran in the context of renewed U.S. sanctions.

Before visiting Europe, Zarif first traveled to China and later Russia, the two other signatory nations that have supported the JCPOA, on the first leg of his diplomatic mission.

Meanwhile, in their first meeting since the U.S. withdrawal from the JCPOA, EU leaders are expected to meet to explore options on Wednesday for keeping the Iran nuclear deal alive and protecting their reviving economic cooperation with Tehran.  “I would like our debate to reconfirm without any doubt that as long as Iran respects the provisions of the deal, the EU will also respect it,” the chairman of the gathering, Donald Tusk, said before the meeting in the Bulgarian capital Sofia.

Russian President Vladimir Putin will also host Merkel on Friday to discuss the Iran deal, among other issues.