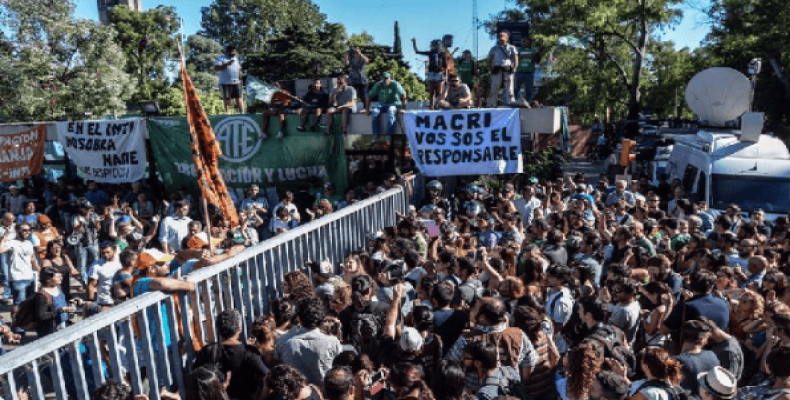 Buenos Aires, January 31 (RHC)-- Argentinian workers mobilized on Tuesday to oppose a new round of layoffs that threaten a total of 372 workers from the National Institute for Industrial Technology, INTI, and the public hospital “Hospital Posadas.”

INTI workers were joined by leaders of the State Workers’ Association, ATE, a half-a-million-strong union, to protest against the announced layoff of the 250 people outside the institution’s gate.  Workers were told about the layoffs last week “via WhatsApp and email.”

According to an ATE delegate, Soledad Pozzuto, “they come because they want to know what happened.  We gather at the gate in spite the fact that the administration informed via e-mail today and tomorrow would be holidays.”

Earlier, on Monday, a police operation prevented workers from entering the institute to hold a public assembly.

Enrique Martinez, INTI’s former director, argued “the instruction is to reduce spending[...], but there is also an ideological and structural component. Multinational corporations that are not involved in the county’s technological development have no interest in INTI’s knowledge being shared with small businesses.” Workers at the institute’s provincial offices remain on high alert and have also rejected the layoffs.

Workers from Hospital Posadas are expected to hold a caravan from the Hospital to the Health Ministry to reject the dismissal of 122 health workers.  Organizers have announced they will block two avenues in Buenos Aires and occupy the vicinity of the Health Ministry “until the authorities meet with the workers.”  They are also backed by the ATE and other major workers’ unions.

Mauricio Macri’s administration has been characterized by massive layoffs in the public and private sectors.  In December 2017, 3,346 people were laid off, 60 percent of them were public workers.  In 2016, Macri’s first year as president, more than 200,000 people lost their jobs. Argentina’s Congress led by Macri’s party “Cambiemos” is also working on labor reform that has been widely opposed by workers’ associations and unions, who argue that it relaxes regulations on hiring and firing practices.