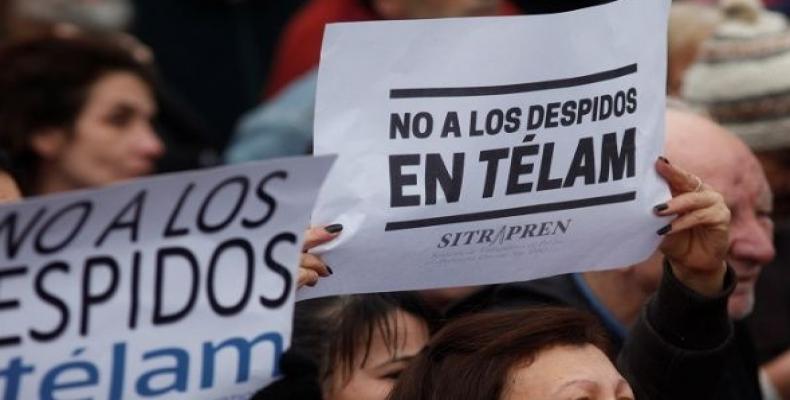 Buenos Aires, July 12 (RHC)-- Following massive protests against the FMI-backed austerity measures in Argentina, a presidential decree has frozen the national income until December 2019 and leaving thousands without a job by the end of the year.

The measure comes after an agreement between the South American country and the International Monetary Fund (IMF).  However, it doesn't include the Federal Intelligence Agency, the Public Income Federal Administration, the Federal Criminal Service, National Universities and Security and Armed Forces in the austerity plan.

The decree, issued by President Mauricio Macri and published in the Official Bulletin, orders to stop hiring public servants until December 31, 2019, when Macri leaves the office.  Besides, more than 6,000 workers will be left jobless starting in 2019.

There are about 6,000 public servants hired by the state through universities, by a “Technical Assistance” program.  According to the decree, all these contracts acquired by universities, public or private, will be terminated beginning on January 1, 2019.

The Modernization Ministry explained that about 5,800 workers will be discharged, but unions say there are between 6 and 7 thousand workers under these kinds of contracts with an average of five years in service. Most of them are working at the health ministry, which could represent a set back in this area.

The decree states that these workers will be hired again through different schemes. It's still unclear if this will actually happen since most government institutions can't hire new personnel until 2020.

Luciano Fernandez, head of the ATE Capital union that represents about 70 percent of State workers, thinks these measures pave the way for future massive dismissals.

“The decree is a very broad adjustment because it reviews the structures of every decentralized institute. With the excuse of reducing political positions, they end up eliminating entire areas when they discharge a leadership, which translates into more dismissals,” Fernandez told Pagina 12 in reference to the 11th article of the decree.

Also, it contemplates a review of the “hiring and employment regime” and “income structure, its compensation regime, and the planning on personnel expenditure.”   The government is trying to reduce the fiscal deficit to 1,3 percent of the GDP by 2019 as part of the agreement with the IMF in exchange for a $50,000 million loan. They agreed to reduce the deficit from 3.2 to 2.7 percent of the GDP in 2008.

“There are about 60,000 workers between technical assistance, consulting and small self-employed taxpayer contracts that constitute an employment relationship and have no stability. All of them do permanent duties even though their contracts say otherwise. The decree says there will be only internal contests with more than 10 years of service. That means those who have been there less than 10 years won't be regularized in any way,” said Fernandez.

Among other cuts, the government is planning to reduce expenditures on internal and foreign travel allowances and official cars on 30 percent. Macri also invited local and state government, as well as the legislative branches, to do the same.