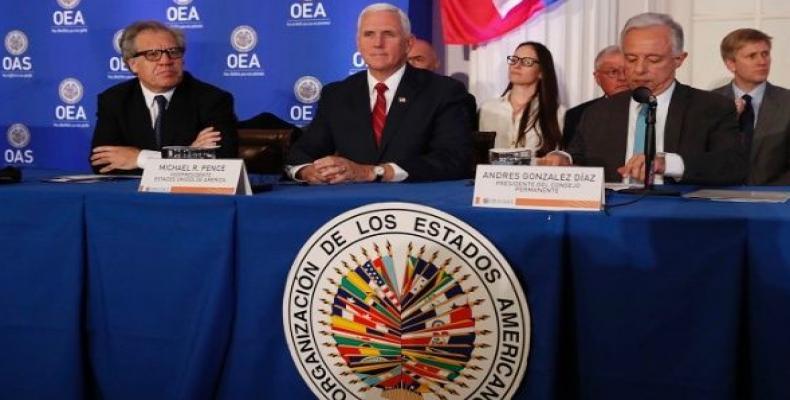 Caracas, May 8 (RHC)-- The Bolivarian government of Venezuela reaffirmed Tuesday its decision to renounce its membership at the Organization of American States (OAS), lamenting that the body has returned to “its original condition as a colonial body, at the service of Washington’s ambition for dominance in our region.”

Through an official statement, Venezuela condemned new aggressions by the United States, aimed at “disturbing the peace of the Venezuelan people, repeating the nefarious practice of U.S. interventions that have caused such harm to Latin America and the Caribbean.”

The statement issued Tuesday was a response to declarations made by U.S. Vice President Mike Pence at the Permanent Council of the OAS, where he asked for the suspension of Venezuela from the OAS and issued a call for Caracas to suspend -- in his words -- “this sham election and organize real elections.”

Pence's “attempts to cover up the damage his government has caused to Venezuelan society through unilateral coercive measures with a false humanitarian concern, which seeks to bend the people’s will to take the wealth and natural resources of our country,” the statement reads.

On Monday, the Venezuelan representative to the OAS, Samuel Moncada, rejected Pence’s statements and attempted to show U.S. concern for the people of the region as hypocritical, citing the tens of thousand of Central America refugees who have lost their Temporary Protected Status (TPS) during the Trump administration, making them subject to deportation to countries where they face threats of violence and death.
Moncada also argued the U.S. aims to “stop the May 20 elections in Venezuela,” through new sanctions and diplomatic aggression, and accused the U.S. of committing an international crime. “The only coercive measures that are accepted and legal are those approved by the United Nations Security Council,” Moncada reminded the U.S. government.

The government statement reiterated that presidential elections in Venezuela will take place in May 20 despite U.S. aggression and interventionism.

Meanwhile, new U.S. Secretary of State Mike Pompeo during a speech in Washington that “a dictator in Venezuela paralyzes its economy and starves its people,” calling for U.S. action.  The Venezuelan government has said that it fears sectors of the right-wing opposition will carry out violent attacks on election day with foreign assistance.