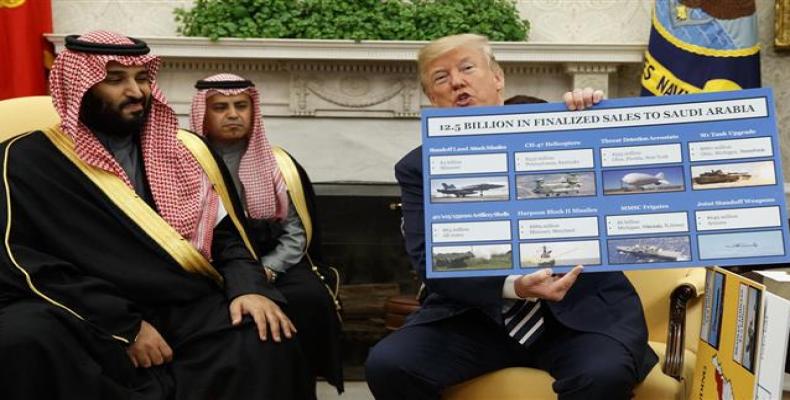 The video was created by data scientist, Will Geary, based on statistics compiled by the Stockholm International Peace Research Institute (SIPRI)'s Arms Transfers Database -- which contains information on all transfers of major conventional weapons from 1950 to the most recent full calendar year.

"The United States destabilizes the world with arms exports, draining budgets that could be used for a brighter future," Zarif tweeted, adding: "Yet its arms can't even secure its citizens; 35% of global military spending failed to stop 15 Saudis from murdering & injuring 9000 Americans on 9/11."

Earlier this week, the U.S. State Department announced that President Donald Trump had given the green light to its plan for boosting American weapons sales.  The so-called "Buy American" plan, which had been prepared at Trump's request, raised controversy at home, with senior lawmakers warning that such a measure would make it more likely that weapons of U.S. origin “will end up in the hands of traffickers, terrorists, and cartels.”

Back in March, a SIPRI report revealed the U.S. had increased its arms sales by 25 percent over the past five years, with the Middle East serving as the destination for around half of those weapons.  Washington supplied arms to as many as 98 states worldwide, accounting for more than a third of global exports, said the report, which also classified Saudi Arabia as the world’s second biggest arms importer.

The Saudi kingdom -- along with other repressive regimes in the Persian Gulf region -- has been among the biggest purchasers of U.S. weapons as it pushes ahead with a bloody military campaign against impoverished Yemen.

Zarif used the mid-March report by SIPRI to criticize the U.S. for taking advantage of the conflicts in the Middle East and flooding the troubled region with weapons.  “The U.S. pumps over half of its arms exports into our region. The vast majority goes to inexperienced and adventurist leaders who are engaged in war crimes,” Zarif said on his Twitter page back then.