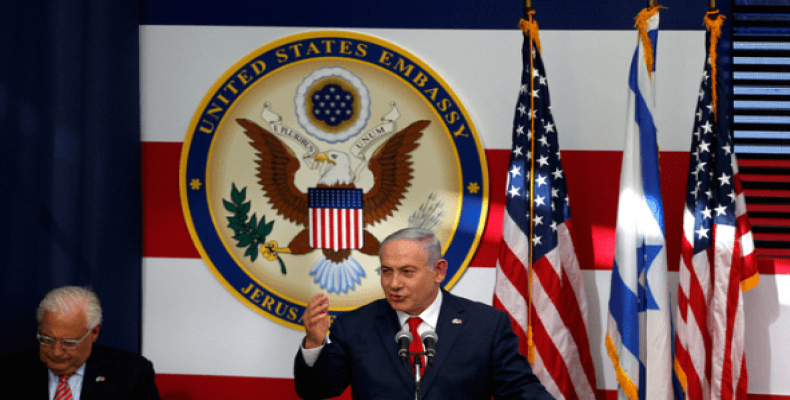 Washington, July 20 (RHC)-- U.S. President Donald Trump spent over $21 million, which is over 100 times what he said it would cost, on adding features to the U.S. embassy in Jerusalem, according to the official U.S. State Department estimate.

According to the federal spending documents, the U.S. State Department gave nearly $21.2 million for a contract to the Maryland-based company Desbuild Limak D&K for designing and building an "addition and compound security upgrades" at the embassy.  These additions are to be made to the former consular building in Jerusalem -- the embassy’s temporary location.  "That’s the way government works," Trump said, according to the ABC News.  "They were going to spend a billion dollars and we are going to spend much less than a half a million."

"We’re going to have it built very quickly and very inexpensively," the U.S. president said in March, according to the AI Monitor, as he sat beside Israeli Prime Minister Benjamin Netanyahu in the Oval Office.  "They put an order in front of my desk last week for a billion dollars.  I said: ‘A billion?  What’s that for?’"  And then Trump falsely claimed: "We’re actually doing it for about $250,000."

The decision to move the U.S. Embassy from Tel Aviv to Jerusalem earlier in May was met with widespread furor, and led to clashes between Palestinians and Israeli troops as over 50 Palestinians were killed during the Great march of Return when they attempted to cross the border between Israel and Gaza.

The relocation ceremony coincided with the 70th anniversary of the country's independence, one day ahead of Nakba -- which resulted in the forced displacement of nearly 700,000 people from their homes after the state of Israel was established in 1948.

The international community, the majority of which has embassies in Tel Aviv, agrees that the future of Jerusalem should be a part of the broader deal between Israel and Palestine.  But, Israeli Prime Minister Benjamin Netanyahu has said he will not give up any part of Jerusalem.