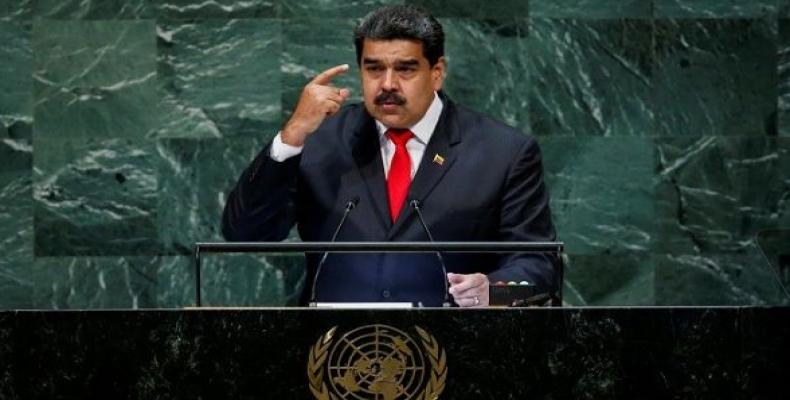 United Nations, September 27 (RHC)-- Speaking at the United Nations General Assembly, Venezuelan President Nicolas Maduro rejected interventionism and recalled that his country has given birth to one of the world's most important independence leaders -- Simon Bolivar -- who led wars against the Spanish colonialists in several countries in the region.

"I bring the truth of a country that has not surrendered, a people that have resisted colonial empires in centuries past.  I bring the voice of a people who have the honor of being the birthplace of the Liberator Simón Bolívar," Maduro said addressing world leaders attending the 73rd General Assembly session.

"Our nation is a country that is harassed and attacked.  Yesterday, in this very place, the president of the United States of America spoke once again against the noble people of Venezuela."

He also spoke of the "illegal sanctions" against his government and how the U.S. is using its currency to strangle the Venezuelan economy.  "Today, the leader of the U.S. announced new actions against our country.  The use of the domination of the exchange rate is illegal from the perspective of international law."

The Venezuelan president went on to say that such conflict between his government and the U.S. administration goes beyond the current issue to a more historical confrontation between imperialism and the struggle for sovereignty.  "Why the attack so ferocious by Trump against Venezuela?  It is a historical conflict, it is the imperialist doctrine of domination of the Monroe Doctrine against the doctrine of justice and liberty that Simon Bolivar bequeathed us."

Nicolas Maduro also touched on the subject of the attack he survived in August with drones and explosives and how the perpetrators had links to U.S. allies.  The Venezuela leader also spoke of the recent media report about a coup attempt plan against his socialist government.  On September 8th, he noted, The New York Times published evidence that links U.S. officials in the planning of a coup against the government of Venezuela."

The Venezuelan president also extended his solidarity to the Palestinian people and their struggle against Israeli occupation and abuses as well as their fight for statehood.

Nicolas Maduro met several world leaders on the sidelines of the UN meeting, including Iranian President Hasan Rouhani in which the two leaders spoke about bilateral ties and issues related to solidarity among countries in the Global South.  He also met the Jamaican Prime Minister and the Russian Foreign Minister Sergi Lavrov who are also attending the United Nations session.