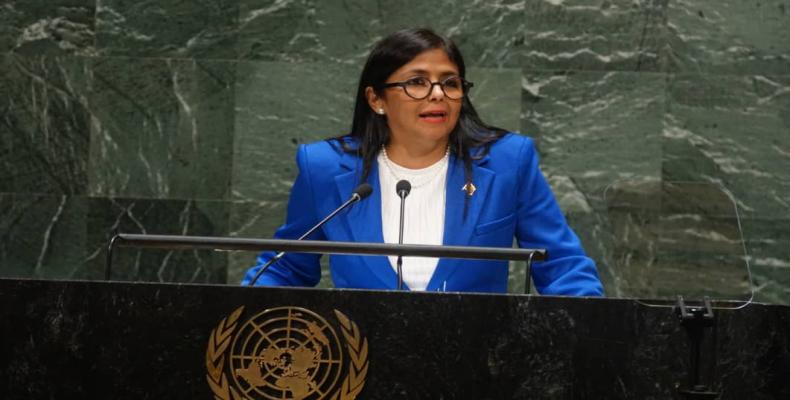 United Nations, September 27 (RHC)-- Venezuelan Vice President Delcy Rodriguez opened her speech at the 74th United Nations General Assembly in New York on Friday in the name of “the only Venezuelan government” that exists, and the one that Washington insists on trying to destroy, referring to the illegal economic blockade on the Nicolas Maduro administration.

The "economic terrorism" being launched against Venezuela by the U.S. government under Donald Trump has cost the Caracas around $130 billion, said the vice president.  “The U.S government has imposed over 350 unilateral coercive measures that include the seizure of Venezuelan resources abroad, an economic blockade that affects our lives, our health system with the main objective to strangle the nation's economy," Rodriguez denounced in front of the world leaders.  She stated that "the brutal financial blockade" has cost the nation up to $130 billion "and is a blatant theft of our resources."

Rodriguez characterized these tactics against Venezuela as the most "perverse experiment against multilateralism" in contemporary history.  She went on to criticize the U.S. military for its "despicable business" of creating wars that have killed millions of people around the world in the past several years alone.

Countering fake information given by Colombian President Ivan Duque during his address to the General Assembly on Wednesday, claiming that the National Liberation Army (ELN) was operating in Venezuela, Rodriguez presented evidence showing the precise locations of paramilitary camps in Santa Marta, Rio Hacha and Maicao in Colombia whose members are preparing to attack Venezuela.

During her speech, the Venezuelan vice president said that the self-proclaimed president of Venezuela, Juan Guido, is being used as a ruse from the White House to try to overthrow Nicolas Maduro, who has the support of the Non-Aligned Country Movement and the vast majority of the member states of the United Nations.