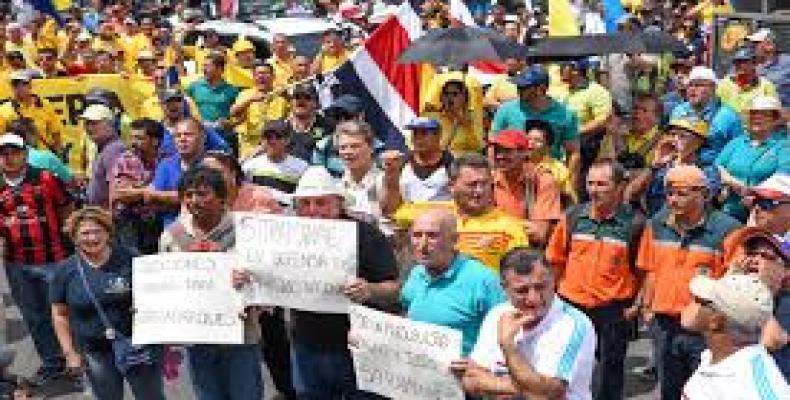 San Jose, October 2 (RHC)-- In Costa Rica, a nearly one month-long strike against a proposed fiscal reform, namely the Law on Strengthening Public Finance, entered its fourth week after a failed meeting between union leaders and representatives of the government.  The union groups rejected a preliminary agreement reached with the government which sought to end the indefinite strike.

Costa Rica’s government is struggling with a 7.1 percent GDP fiscal deficit which has increased public debt load.  President Carlos Alvarado, who took office in May, proposed the implementation of value-added tax to replace the current sales tax.  According to the proposal, the tax will be extended to goods which are currently exempt, including a one percent duty on staple food items.  It will also limit salary increases, bonus payments and severance packages in the public sector.

To protest these reforms, Costa Rica’s unions began an indefinite strike on September 10th arguing that the imposition of the tax will impact the lower and middle class negatively.  In July, the unions sent 38 proposals for an alternative bill named the Justice and Solidarity Tax Reform which according to them would have been an alternative way to strengthen public finance.

The proposed bill by the unions focuses on combating tax evasion and fraud, as well as introducing more taxes on companies and banks that generate extraordinary profits, eliminating "luxury" pensions for former presidents, and reducing state financial support for political parties. When all failed, the unions started striking in September.

Alvarado even called on public institutions to file lawsuits with the courts to declare the strike illegal, and so far there have been 10 rules of illegality and one of legality.  The government also stressed the fact that the strike has to be withdrawn for any negotiation to take place.  Since the strike began, dialogue between the unions and the government have been taking place with no results.

The latest rejection of a preliminary agreement came after unions and the Costa Rican government, with the Catholic Church as the mediator, debated the tax reforms for eight days that lasted up to 15 hours on several occasions.

The secretary of the National Association of Public and Private Employees, Albino Vargas, said that one of the reasons why they reject the tax reform is because the document pardons tax evasion of big companies and pressures the working class to pay more in taxes.

"We regret very much that many union bases have not accepted the document that was built jointly by the government and unions.  We greatly regret it mainly for all those young people and children who will not be able to attend classes again and the people who will not be able to be attended to in the hospitals of the country," said Minister of Labor and Social Security Steven Núñez.