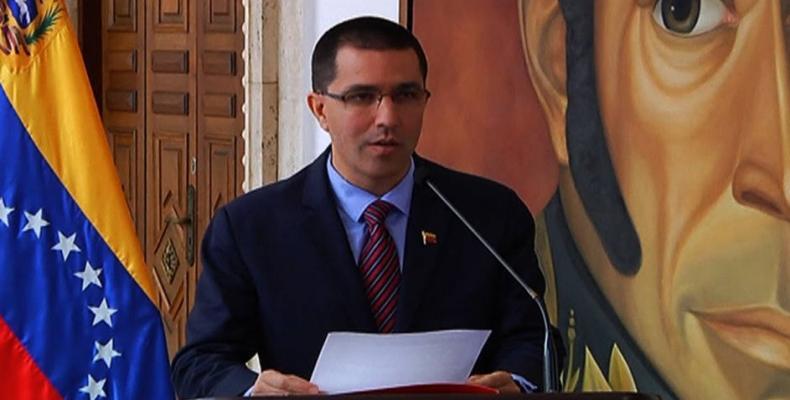 Caracas, October 12 (RHC)-- Venezuelan Foreign Minister Jorge Arreaza has encouraged German Chancellor Angela Merkel to use her country's power to end the United States-led economic blockade of the South America country, telling the German leader she shouldn't follow the destructive and interventions policies of the Donald Trump administration and its Latin American allies.

In a series of posts on his Twitter account, Arreaza said the subordinate rule Germany and other European countries have assumed only harms the citizens of the country they should be concerned about.

"It is regrettable that the German Chancellor, Angela Merkel, is so obviously subordinated to the Trump administration and its satellite governments in Latin America," Arreaza said while accusing these entities of implementing an “obsessive and desperate effort to attack and block the economy and the people of Venezuela."

Arreza’s comments were in response to statements made by right-wing Chilean President Sebastian Piñera during a meeting with Merkel in Berlin this week.  Piñera, who is one of the most outspoken members of the so-called Lima-group, is currently on a 10-day European tour.

The Venezuelan foreign minister went on to say that the German government was “reinstating interventionist actions against Venezuela,” and called for Germany and others to respect "our institutions, our sovereignty and... comply with the most basic obligations of international law."

In a third and last tweet, Arreaza said that if Germany had genuine intentions of cooperating with Venezuela, "it would raise its powerful and influential voice in the world to demand an end to the criminal unilateral coercive measures and the inclement economic blockade that directly affects the Venezuelan people."

Piñera is also one of Latin America’s most outspoken opponents of Venezuela’s Bolivarian Revolution.  The Chilean president is the current leader of the Lima Group, an informal group of over a dozen Latin American presidents who want to see Venezuelan President Nicolas Maduro removed from office.

In late September, Piñera met with President Donald Trump to discuss “the efforts to restore democracy in Venezuela,” according to the White House. Prior to their meeting, the New York Times confirmed that the Trump administration engaged in talks with right-wing Venezuelan forces to plan a coup against the democratically-elected Maduro government.

In April, the Lima Group retracted Maduro’s invitation to participate in the Summit of the Americas in Lima, Peru.  The event was hosted by the Organization of American States (OAS), to which Venezuela is a member state.  The U.S. State Department backed the move as well as the group’s rejection of the Venezuelan government’s alleged “unilateral” decision to set a date for presidential elections.