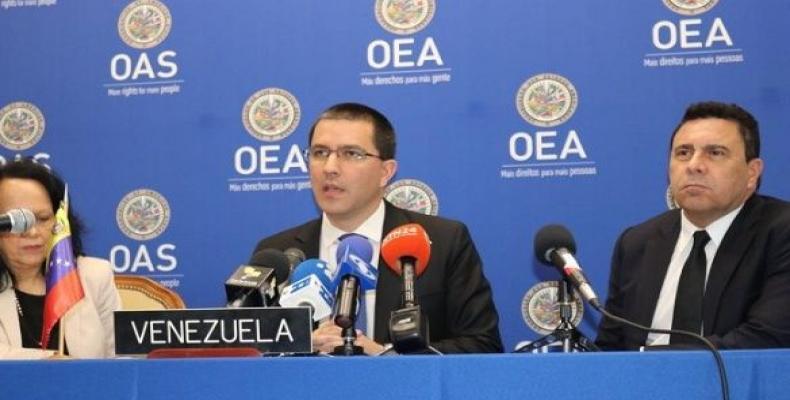 Washington, June 6 (RHC)-- Venezuelan Foreign Minister Jorge Arreaza has condemned the illegal resolution approved during the session of the Organization of American States.   The resolution proposed by the United States to suspend Venezuela from the OAS needed at least 24 votes, however, they only obtained 19 with 11 abstentions.

"Venezuela absolutely rejects the decisions that have been taken today by those 19 countries and we guarantee that we are going forward with our people to face the difficulties and we will solve our problems among Venezuelans without their interventions in our country.  Venezuela is free and sovereign," said the Venezuelan minister.

During the OAS session, Arreaza affirmed that Venezuela voluntarily withdrew from the organization because it does not help the peoples of the Americas, "as it has been demonstrated today and what it does is to generate conditions for interventionism and interference to violate international law."

Also, the Venezuelan official called for the lifting of sanctions and the unlocking of the nation's funds, and not for more sanctions to be imposed.  "We are concerned that we Venezuelans organize ourselves democratically to solve our problems (...) Lift the sanctions against Venezuela and will be able to get ahead with our own resources," Arreaza said.

While the body approved a motion to include the suspension of Venezuela in its agenda, the resolution still needed approval from the foreign ministers of at least 24 of the 35 member States.

The Dominican Republic, Bahamas, Jamaica and Barbados also voted in favor of the resolution.

Venezuela, Bolivia, Dominica and Saint Vincent and the Grenadines voted against.