Alvaro Uribe Doesn't Want to Give Peace a Chance in Colombia 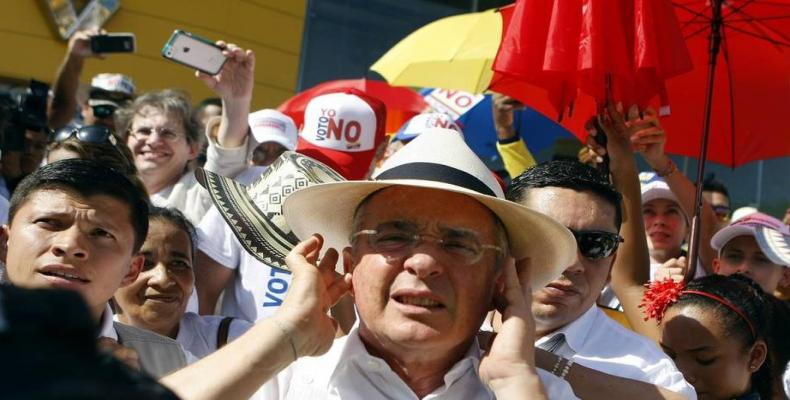 Bogota, October 17 (RHC)-- The chief proponent of the “No” vote in Colombia’s recent plebiscite on the historic peace deal between the government and the FARC guerrilla army, far-right Senator and former President Alvaro Uribe, has doubled down on his calls for an overhaul of the end-of-conflict agreements with a proposal to the government to negotiate new accords that will put FARC rebels behind bars for their crimes and block their participation in politics.

The recommendations outlined in Uribe’s 26-page proposal -- submitted to the government this week and published in full by the Colombian magazine Semana -- reiterate the complaints the controversial politician has raised throughout the nearly four-year negotiations between the government and the FARC in Havana.  President Juan Manuel Santos’ administration is expected to respond with a statement on whether the proposals are viable.

Titled “Basis of a National Peace Accord,” Uribe’s appeal argues that the outcome of the October 2nd plebiscite on the deal — in which voters rejected the accords by less than half a percentage point — obligate Santos to renegotiate with the FARC.  The ballot aimed to ratify the deal with Colombian society, but is only binding on the president, not the Congress.

Uribe breaks down the deal by chapter, taking particular aim at the measures related to transitional justice and political participation.  Specifically, he demands that FARC rebels guilty of serious crimes should be criminally prosecuted and face between five and eight years in jail if they admit responsibility, and up to 20 years if they do not.

The former Colombian president has staunchly rejected the peace deal’s transitional justice mechanism that would offer reduced sentences and mostly community service for those who own up to their crimes in the name of prioritizing truth and reconciliation.  He advocates “deprivation of liberty” instead of “restriction of liberty,” meaning he thinks former rebels should be behind bars, not sent to alternative places like farms to rebuild the damages of the conflict, as planned in the deal.

In total, Uribe put forward 18 recommendations in the area of what he refers to as “justice and impunity.” The firebrand politician has often criticized the peace deal on claims that it is an “impunity deal” for the FARC, whose rebels he characterizes as terrorists and criminals.

With respect to political participation, Uribe rejected the transitional mechanism that will grant the FARC non-voting representation in Congress until the next election in 2018, when it will campaign as a political party for the first time with five seats guaranteed both in the lower house of Congress and the Senate. Uribe argued the measures of the deal afford FARC rebels “excessive benefits,” demanding that under no circumstances should seats be guaranteed or that anyone guilty of heinous crimes be allowed in Congress.

Supporters of the peace deal argue that agreements on political participation, alongside the other five cornerstone of the peace accords, are essential for bringing an end to over five decades of internal armed conflict and ensuring that a war of ideas in party politics — not weapons — define Colombia’s political future.

Colombia’s Semana magazine pointed out that many of the proposals in Uribe’s “No” manifesto are too far off from the path the peace talks have taken to be considered viable from either side of the negotiating table.

“In a simple reading, at least some are identifiable as difficult for the government to accept,” reported Semana. “At least 26 proposals in the chapter on justice and political participation focus on issues that are non-negotiable for the government and the FARC.”  Uribe also argued that amnesty should not be extended to drug trafficking-related crimes and that the FARC should pay reparations to victims, among other demands. The FARC has already pledged to hand over its assets, including large tracts of land, to fund reparations.

Uribe’s term in office was marked by record-level human rights abuses and numbers of people fleeing the country as refugees. He has also been accused of links to violence right-wing paramilitary groups and also oversaw the “false positives” scandal. The shocking scandal broke in 2008, revealing a concerted military strategy of murdering civilians, including homeless and mentally ill people, and dressing them in guerrilla fatigues to boost the government’s body count in the war on rebels. More than 3,000 people were killed as “false positives” during Uribe’s two terms in office.