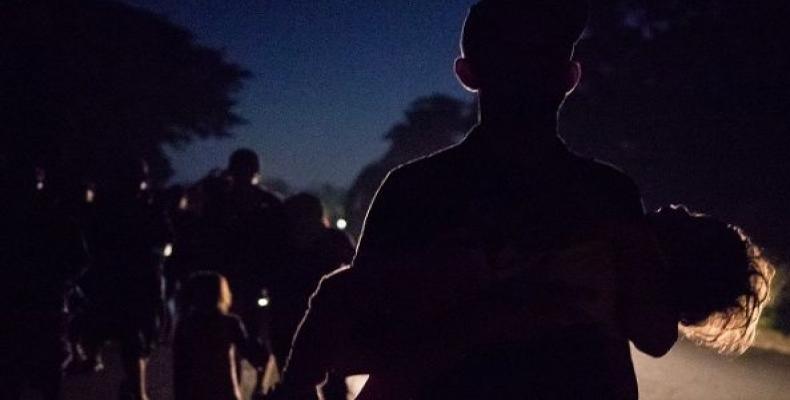 Mexico City, November 2 (RHC)-- The migrant caravan, self-named Central American Exodus, has left for the city of Matias Romero in the state of Oaxaca, headed toward Veracruz.

According to immigration expert Amelia Frank-Vitale, who is walking with the Exodus, after a massive general assembly, the migrants decided to travel toward the coastal city of Veracruz “because of the delicate health condition, especially of children.”  The highway to Oaxaca City is “narrow with curves, hills and few villages with the infrastructure to receive this massive exodus of displaced persons from Central America,” writes Frank-Vitale on her Facebook.

Moreover, the decision to travel to Veracruz comes after the Mexican government blocked the migrant caravan's original plan to travel to Oaxaca in more than 70 buses offered by “different sources of support.” It's unknown who offered the migrants free transport to Oaxaca and potentially Mexico City but it would have saved them from walking thousands of kilometers.  “The attempt to travel by bus failed,” coordinator Walter Cuello told general assembly, VOX reported.

"Under pressure from the Mexican federal government (supporters) withdrew their (offer), leaving the only option for the Exodus to continue on foot to Veracruz, a state with a high risk of violence at the hands of organized crime,” writes Vitale-Frank in Spanish.

The migrant group has received an outpouring of support from Mexican people and organizations ever since entering Mexican territory, but the Enrique Peña Nieto administration has been less welcoming, ordering the use of tear gas and using low-flying helicopters to try to deter the Exodus from continuing north.

Oxfam's Latin America and the Caribbean office came out against both the Mexican and Guatemalan government for these “acute human rights abuses and violations against those forced to migrate from Central America to the United States.”

"The authorities in Guatemala and Mexico are intentionally hindering the free and safe transit of migrants, putting their lives at risk.  There have been police blockades on the highways, clashes with tear gas, and the Mexican Federal Police used a helicopter to frighten families with children in arms that were crossing the river Suchiate.”

On Sunday, Mexican police shot into the crowd of migrants entering the country killing a Honduran man.  "On the way to Matias Romero, #Oaxaca, national police forced members of the #MigrantCaravan who had gotten a lift to get out," teleSUR reported.

In a statement earlier this week, the regional director of Oxfam, Asier Hernando, called on the “governments of Honduras, Guatemala, Mexico, and the United States to fulfill their obligation to protect and guarantee the human rights of all migrants… and guarantee the principles of family unity,” referring to last spring’s U.S. policy of separating thousands of families at the border.

REDIAS added: “We urgently call for these countries of transit and destination to refrain from criminalizing and stigmatizing forced migrants.”

According to Oxfam, they and local partners have distributed “5,250 personal hygiene kits, 560 packages of food and installed 20 portable latrines, as well as showers,” in Guatemala alone.  Hernando adds that his organization is preparing for the Exodus’ arrival in Mexico City.