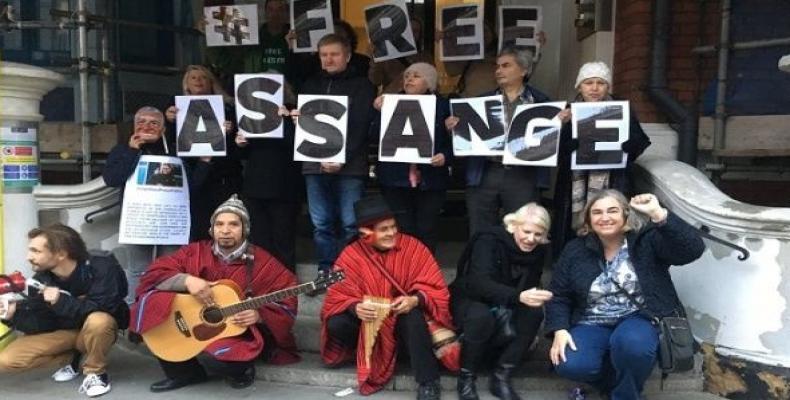 London, November 6 (RHC)-- Christine Assange says her son, Julian, is in danger and the victim of a “slow and cruel assassination” in the Ecuadorean Embassy in London.

In an interview for on-line campaigns, #ReconnectJulian and #United4J, Julian Assange's mother said: “The modern-day cage for political prisoners is no longer the Tower of London -- it is the Ecuadorian Embassy.

“He is right now alone, sick, and in pain; silenced in solitary confinement, cut off from all contact, and being tortured in the heart of London,” Assange said, adding he has been living in the embassy since 2012 out of fear of persecution and extradition.

Over the past six years, she said, her son has been refused basic health requirements, fresh air, exercise, sunshine for Vitamin D, proper medical and dental care, and his health has suffered for it.

Assange’s mother finally expressed her concern over the recent announcement made by Ecuador former president, Rafael Correa, who warned that a clandestine agreement was made between U.S. Vice President Mike Pence and Ecuadorean officials to extradite him to the United States.

“(Rafael) stated because of the political cost of expelling him from their embassy was too high, the plan was to break him down mentally -- a new impossible, inhumane set of rules and protocols was implemented at the embassy to torture him to such a point that he will break and be forced to leave,” she said.

“My son is in critical danger because of brutal, political prosecution by the bullies in power whose the crimes of corruption he courageously exposed while he was editor in chief of WikiLeaks,” she said, calling on politicians, journalists, and members of the public to “stand up” in defense of her son, save his life and push for his freedom.

The interview triggered dozens of protests and brought thousands of sympathizers together, demonstrating across the U.S., the U.K., and parts of Europe.

Assange has been living in the Ecuadorean embassy in London since 2012.  In March, the country cut off his access to the Internet and heavily curtailed his freedom of speech.  In early October, the country partially restored his Internet and mobile phone access.  Assange has, however, filed a lawsuit against the government of Ecuador for violating his fundamental rights.