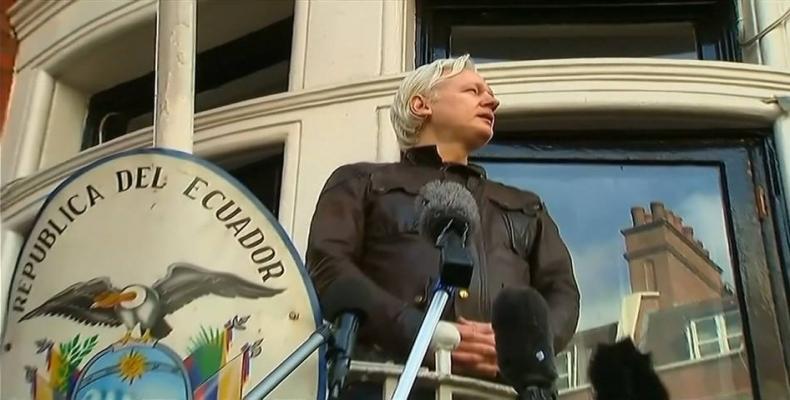 Quito, January 10 (RHC)-- Ecuador is seeking out a third country to mediate the safe passage of Julian Assange from its embassy in the UK, according to the Ecuadorean foreign ministry.  Observers say that after living for more than five years behind the safety of Ecuador’s London embassy, Assange may be in for a change of address.

Assange has reportedly received numerous warnings from the Ecuadorean president, Lenin Moreno, requesting that he refrain from commenting on politics of the nation’s allies.  However, the WikiLeaks founder publicly rejected the idea in a Tweet, saying: If President Moreno wants to gag my reporting of human rights abuses in Spain, he should say so explicitly -- together with the legal basis.

Moreno has defended the activist on numerous occasions, continuing in his predecessor, Rafael Correa’s, footsteps in maintaining amnesty for as long as “his life may be in danger.”  He said: “I respect the situation he is in, which calls for respect of his human rights, but we also ask that he respects the situation he is in,” Moreno said following his election to the presidency.

Assange was granted asylum in 2012 to avoid extradition to Sweden over rape allegations.  Assange, who denies the allegations, feared Sweden would hand him over to the United States to face prosecution over WikiLeaks’ publication of thousands of classified military and diplomatic documents in one of the largest information leaks in U.S. history.

However, during his campaign, Moreno warned Julian Assange “not to intervene in the politics” of countries friendly to Ecuador.  “The situation of Assange in the embassy is unsustainable,” said César Ricaurte, head of a Quito-based nonprofit for press freedom, Fundamedios.  “I think the government is looking for a way out.”

Assange dodged one eviction order in the nation’s election last year, after the right-wing candidate who had vowed to kick him out of the embassy lost to Moreno.