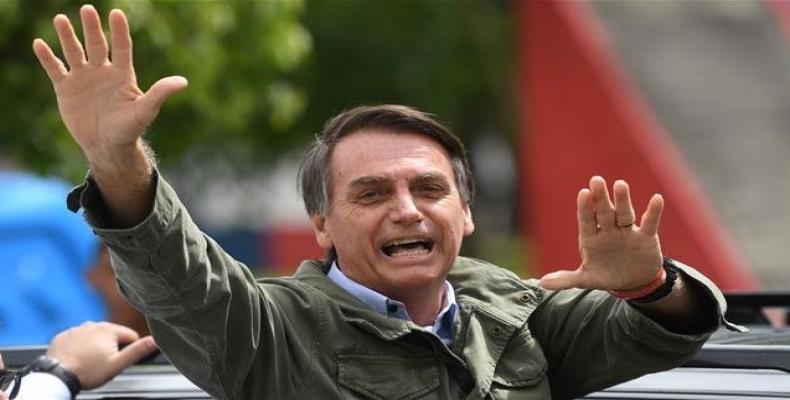 Brasilia, January 10 (RHC)-- Brazilian President Jair Bolsonaro, in what appears to be an about-face, has promised the Brazilian Armed Forces that he will not approve the opening of any United States military base during his term, according to a report in the Folha de Sao Paulo newspaper.

The Brazilian newspaper stated that the Defense Minister Fernando Azevedo conferred the message from the president to army generals.

Bolsonaro, who assumed the presidency of Brazil on January 1st, previously said that he was open to the possibility of hosting a U.S. base in his country.

"He told me he never said that. It was a comment he made when talking about the Russian base (in Venezuela) and then suddenly this came out that it was a U.S. base," Heleno told reporters after a cabinet meeting.

“The [Brazilian] military reject the US military base that Bolsonaro wants.  It had not been a week since he took office as president, when Bolsonaro had his first confrontation with the military high command.”

The plan to offer to host a base appears to have been discarded due to opposition from the Brazilian Armed Forces, who view foreign presence as a transgression of national sovereignty.

Following President Bolsonaro's statements, three senior officers spoke with newspaper O Estado de Sao Paulo to affirm that a U.S. military base in Brazil is "unnecessary and inopportune" and that the president's idea does not fit to "the national defense policy."

Moreover, one of the officers told the newspaper that the presence of foreign troops is only justified "when there is a risk of external aggression without reaction capacity, which could jeopardize the integrity of the nation."

"The Army's High Command, which is the gravity center of the Brazilian military power, expressed its discontent in conversations of its members, four-star generals," Folha de Sao Paulo reported and explained that "in Brazil, the mere idea of having U.S. military permanently installed causes urticaria to the High Command."