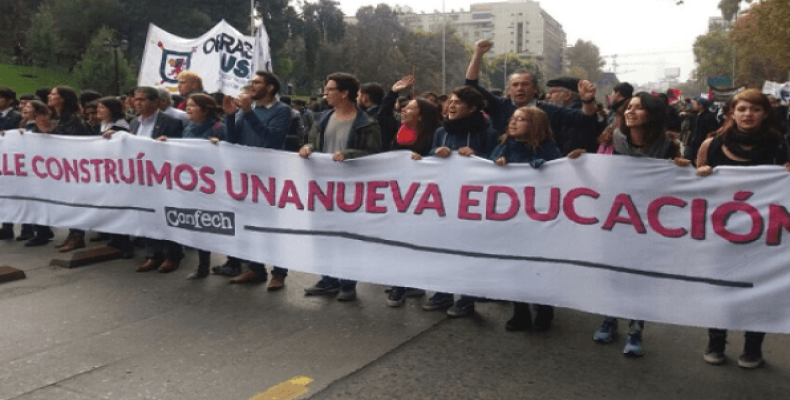 Santiago de Chile, May 10 (RHC)-- Tens of thousands of Chilean students marched through the streets of Santiago de Chile and other cities to demand free and quality public education and an end to crippling student debts.

Under the banner "End the debt," the Confederation of Students of Chile, known as CONFECH, and Federation of University Students of Chile, or FECH, announced that the latest protests were called to to demand the government cancel all debts under the Credit with State Guarantee program, known as CAE, after the administration of President Michelle Bachelet reiterated that there won't be a debt pardon and ended all negotiations on the issue.

"To bring awareness to the massive debts that thousands of students in higher education face and where the banks have made a business off it," said the FECH President Daniel Andrade of the purpose of the action.

CONFECH reported that 250,000 students protested across the country, with 80,000 students taking to the streets in Santiago alone.  Local media reported that some clashes broke out between police and protesters during the march, with security forces deploying water cannons to push back protesters.

Ahead of Tuesday's march, Chilean students also took part in a social media campaign to raise awareness about the impact of runaway student debts, holding signs with the debts they have racked up with banks and private lending institutions in order to be able to complete their education.

The main march began at 11:00 a.m. local time at Santiago's Plaza Italia and was set to continue for long blocks in the capital city. FECH's Andrade criticized Minister of Education Adriana Delpiano for not agreeding to talk to student leaders and consider their requests.
"We call on the minister regarding two main things: the first, to not refuse the discussion or the proposals of the student movement," said Andrade. "The second call is not to shut us in a lawsuit such as the debt forgiveness."

Among their demands, students have called for universal free and high-quality education, regulations to guarantees transparency, democracy, and non-sexist education, as well as new measures to penalize profiteering in higher education.

Students' organizations report that some one million university students have major debts for studying and that only 15 percent of enrollment is in state university, highlighting the crisis of for-profit higher education that takes advantage of students.

"The government can't wash its hands saying they can't forgive the educational debt, but they have to generate effective solutions to the result of their bad policies," said Sofia Barahona, from Confech.

Rising education costs in Chile have cut many students out, leaving countless others with crippling debts.  Meanwhile, private companies in the sector continue to make large profits and many education institutions have closed down or undergone mergers.

Chile's former dictator Augusto Pinochet tore down public education in 1981.  Under pressure from massive student protests that erupted in 2011, Bachelet signed off on a plan to provide free university education, but student movements have slammed the government for failing to live up to the promises.