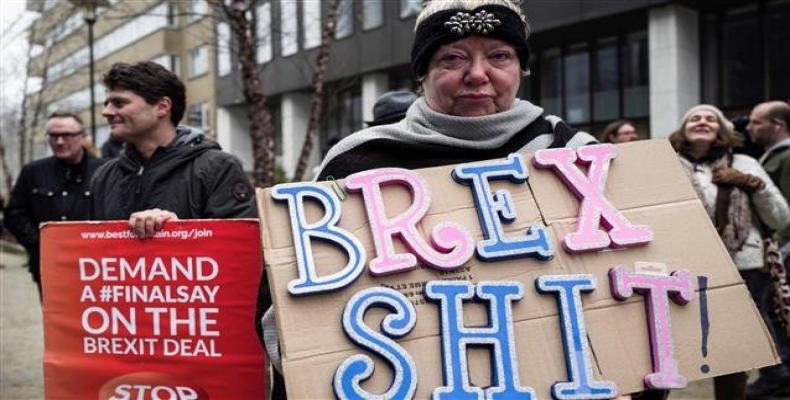 London, November 27 (RHC)-- In London, a major study suggests a controversial deal on withdrawal of the United Kingdom from the European Union, negotiated and championed by Prime Minister Theresa May, would rob the country of a significant portion of its wealth over the next decade.

The study summed up in a report by The National Institute of Economic and Social research showed that Britain will lose the size of Wales or the City of London’s economic value by 2030 if May’s Brexit deal with the EU is enforced after March 29, 2019, when the country officially leaves the European Union.

The report said the Brexit deal would leave Britain better off than withdrawing from the EU without an agreement, but it insisted that it could cost Britain dearly as the country could lose up to three percent of its Gross Domestic Product, or GDP, each year until 2030.

It also added that under the agreement, Britain will enjoy less trade, reduced foreign investment and lower levels of migration over the years, adding that the scenario would result in a situation in which the UK and the EU fail to work out a comprehensive trade deal by the end of 2021, when a two-year transition period for Brexit ends and Britain leaves the EU’s main trade mechanisms.

The study said that the EU-Canada-style deal would cause Britain to lose around 2.8 percent of its GDP each year, a cost of  £700 imposed on each British citizen.

“Our key finding is that if the Government's proposed Brexit deal is implemented so that the UK leaves the EU Customs Union and Single Market in 2021, then by 2030 GDP will be around 4% lower than it would have been had the UK stayed in the EU,” said the report, adding, “This is largely because higher impediments to services trade make it less attractive to sell services from the UK.”

The report also warned that under the Brexit deal negotiated by May’s government, British workers will produce lower levels of wealth.  “This discourages investment in the UK and ultimately means that UK workers are less productive than they would have been if the UK had stayed in the EU,” it said.

After two years of tough negotiations with the EU, May and her cabinet managed to obtain the EU’s approval for the Brexit deal in a summit in Brussels.

May now faces her biggest hurdle of enforcing the Brexit deal as she will go with it through the British parliament on December 12th.  Many warn the House of Commons could reject the deal, a move that could force Britain to leave the EU without an agreement that could outline its departure terms as well as its future relations with the bloc.