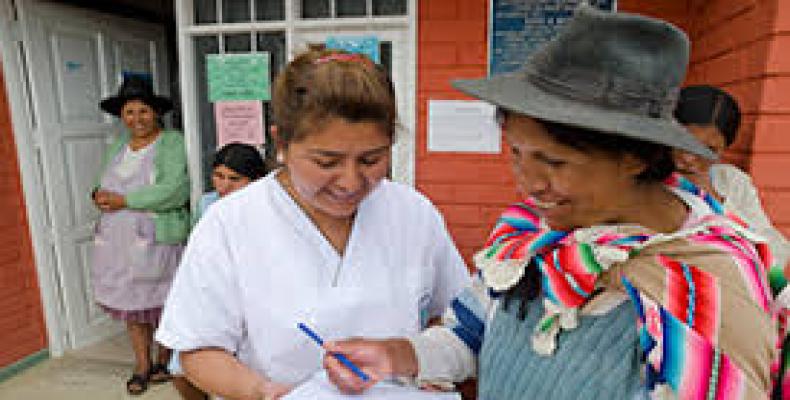 La Paz, January 7 (RHC)-- The Bolivian government under President Evo Morales has officially begun to register citizens for free universal health care that will be available in March.

Health Minister Adolfo Zarate announced that a brigade of healthcare officials will go door-to-door throughout the country to register uninsured Bolivians between the ages of five and 60 until January 28th in an initial phase.  After that, registration will be continual.

Zarate said that registration will take less than two minutes and informs residents of the precise location of their nearest healthcare facilities.  Bolivians will also be able to register for the free, public healthcare at local health fairs.

"We officially started the registration process for the Unified Health System, (SUS in Spanish) on January 2,” Zarate told reporters.  Starting in March the UHS will provide all Bolivians without insurance with free, quality medical attention that currently citizens have to pay for out of pocket or take out private insurance to cover. The government says that private insurance plans and people over the age of 60 already covered by social security will not be affected by the new plan.

Zarate says that "beyond a political interest (for free public healthcare) there is a greater one: to guarantee the welfare of the population."

Local media says that there are already 3,300 public hospitals functioning to attend to all levels and varieties of medical ailments, but the government is planning to open six new hospitals by August 2019.

The administration hopes to register Bolivia’s 5.8 million who don’t have medical coverage or insurance under the Unified Health System and says it will hire some 8,000 doctors and nurses within the next several months to care for the new members of the system.

Bolivia's economy is continuing its 12th year of growth, registering a 4.4 percent expansion rate in 2018 alone, far ahead of the region's 1.2 point economic growth rate, according to the U.N. Economic Commission for Latin America and Caribbean (ECLAC).