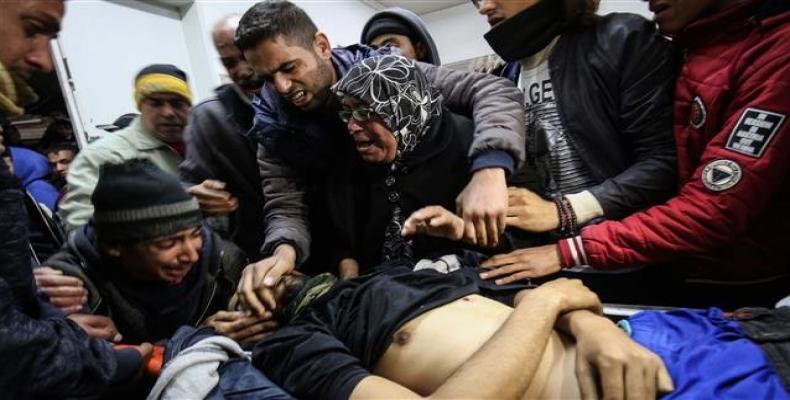 Ramallah, January 29 (RHC)-- In the occupied West Bank, thousands of mourners joined the funeral of Hamdi Naasan, only a day after Israeli settlers shot and killed the 38-year-old Palestinian during clashes between Palestinian protesters and Israeli settlers.  At least 30 others were wounded.

Witnesses say Israeli forces saw the settlers attack the protesters but did not intervene, and in turn attacked the Palestinians.  U.N. Middle East envoy Nickolay Mladenov called the killing “shocking and unacceptable” and called for those responsible to be brought to justice.

Israeli settlements in the West Bank are considered illegal under international law.  Laila Ghannam, governor of nearby Ramallah, told reporters: “This crime is against the rights of our people in al-Mughayyir village, which was done by a group of settlers with protection of the terrorism army, the Israeli army.”

Naasan’s killing came amid a wave of violence across the Occupied Territories over the weekend.  On Friday, Israeli forces shot and killed 25-year-old Ehab Abed in Gaza during weekly protests by the separation barrier with Israel, known as the Great March of Return.