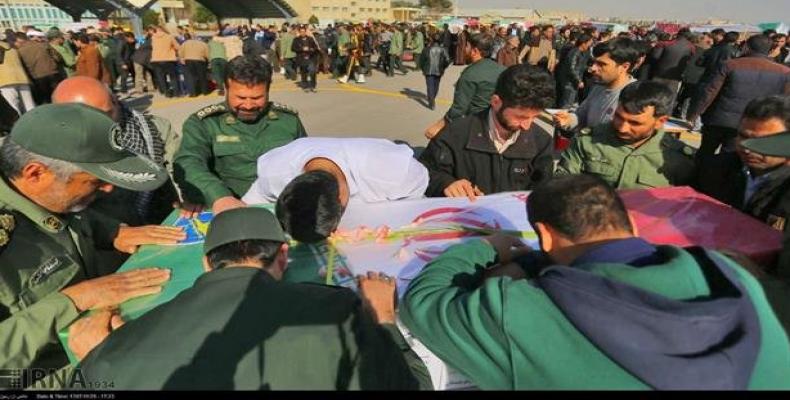 Tehran, February 15 (RHC)-- In Iran, at least 27 members of the elite Revolutionary Guard were killed after a suicide car bomber targeted their military convoy near the Pakistan border.  The attack in the Sistan-Baluchestan province in Iran’s southeast was claimed by a Sunni militant group fighting for Baloch independence.

The leader of the Islamic Revolution Ayatollah Seyyed Ali Khamenei denounced the bloody terrorist attack that targeted members of Iran’s Islamic Revolution Guards Corps (IRGC), saying the spy agencies of certain regional and trans-regional countries had a hand in this crime.   In a message on Thursday, Ayatollah Khamenei offered condolences to the bereaved families of the IRGC forces who lost their lives in Wednesday’s terrorist bomb attack.  He called on the IRGC and relevant government institutions to swiftly and seriously follow up on the incident and deal with the perpetrators.

The attack came as the Donald Trump administration convened a conference in Warsaw, Poland -- billed as a Middle East peace summit -- which was largely aimed at drumming up support for U.S.-imposed sanctions on Iran.   Foreign ministers from over 60 countries joined the talks, which were led by Vice President Mike Pence and Secretary of State Mike Pompeo, along with President Trump’s senior adviser and son-in-law Jared Kushner.

France and Germany -- who fought the Trump administration’s withdrawal from the 2015 Iran nuclear deal -- declined to send foreign ministers to the conference.  Ahead of the talks, Israeli Prime Minister Benjamin Netanyahu boasted that the conference was aimed at promoting war with Iran.

President Trump’s personal attorney Rudy Giuliani spoke on the sidelines of the Warsaw summit, calling for the overthrow of Iran’s government during a speech at a rally of Iranian exiles known as the MEK, which was formerly on the U.S. terrorist watch list.  Giuliani later admitted he was paid by the group to speak at their rally. This week marks the 40th anniversary of Iran’s revolution, which toppled the U.S.-backed dictatorship.

Meanwhile, The New York Times reports the Trump administration has ramped up a secret program aimed at sabotaging Iran’s rockets and missiles -- a program that may be behind recent failures by Iran’s space agency to launch satellites into orbit.  The Times cited unnamed Trump administration officials who said the U.S. has worked secretly for years to slip faulty parts and materials into Iran’s aerospace supply chain.