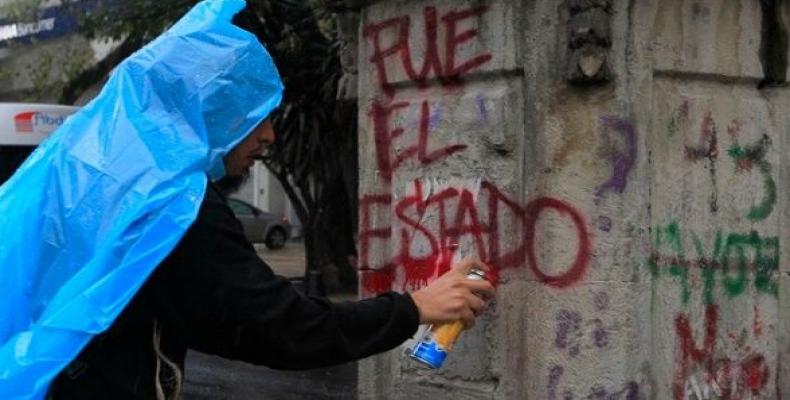 Geneva, March 16 (RHC)-- Mexican authorities have been linked to the disappearance of the 43 Ayotzinapa students, the National Human Rights Commission (NHRC).  In a report delivered to international organizations gathered at the United Nations headquarters in Geneva, Switzerland, NHRC confirmed that under the former Enrique Peña Nieto Administration, three tiers of Mexican legislation conspired together with criminal organizations to mislead investigators.

The report consolidated some 672 interviews, 500 victim-assistance operations, 223 expert examinations, over 3,000 analyses and revisions of 41 criminal and federal files, as well as 724 field investigations, and 1,890 formal information requests.  It concluded its research by implicating 17 officials on 128 counts of human rights violations and collusion.

NHRC president, Luis Raul Gonzalez, said: “Faced the lack of reliable information forwarded by the authorities in different areas developed the investigation of the case, as well as the refusals and obstacles to the development of their work,” the commission is recommending the transfer of part of its investigation to another location.  Gonzalez requested that the 114 bones selected by NHRC experts from the some 63,000 salvaged fragments be transported to Austria for further analysis and to determine it they belong to the missing teachers.

Almost 50 students from the Rural Normal School “Raul Isidro Burgos” in Ayotzinapa disappeared in September of 2014 en route to a political protest in a nearby city.  No trace of the students was ever found.  Official statements from the Enrique Peña Nieto administration claim the students were arrested in Iguala by local authorities who delivered them to members of the Guerreros Unidos cartel before being allegedly killed and their bodies incinerated.

However, experts say the traceless incineration of so many bodies in a dumpster, according to police reports, is impossible and have joined family members in the push for justice.

During a recent press conference, Mexican President Andres Manuel Lopez Obrador said he was not aware of any government conspiracy concerning the Ayotzinapa students, but continues his resolve for justice which he sanctioned in January.  "I do not have information about that, about who gave the order," Lopez Obrador said, assuring that, on the part of the administration, there was no order to hide information of the military assumption among the students.

A Commission for Truth and Access to Justice was established to carry out the investigations of not only the Ayotzinapa alumni but also the more than 37,000 Mexican who have disappeared over the last decade.