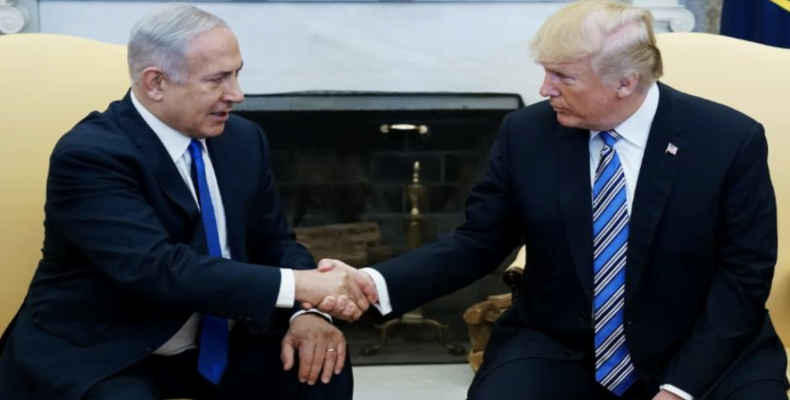 Washington, March 22 (RHC)-- U.S. President Donald Trump says it was time to back what he described as the Israeli regime's "sovereignty" over the Golan Heights, a Syrian territory under Israeli occupation since 1967.

"After 52 years it is time for the United States to fully recognize Israel’s Sovereignty over the Golan Heights, which is of critical strategic and security importance to the State of Israel and Regional Stability!" Trump said on Twitter.

In December 2017, Trump's recognition of Jerusalem as Israel's so-called capital touched off a wave of protests which continue to this day.  Trump's tweet comes ahead of a visit by Israeli Prime Minister Benjamin Netanyahu to Washington next week to meet with the U.S. president and address the American Israel Public Affairs Committee (AIPAC).  Netanyahu has been pressing for Washington to recognize its claim to the occupied Golan Heights.

Earlier this month, the U.S. State Department changed its usual description of the Golan Heights from "Israeli-occupied" to "Israeli-controlled" in an annual global human rights report.  Washington’s recognition of the Israeli-occupied area would mark a major shift in U.S. policy.  The United Nations emphasizes Syria's sovereignty over the territory.

In 1967, Israel waged a full-scale war against Arab territories, during which it occupied a large swathe of Golan and annexed it four years later, a move never recognized by the international community.

In 1973, another war broke out and a year later, a UN-brokered ceasefire came into force, according to which Tel Aviv and Damascus agreed to separate their troops and create a buffer zone in the Golan Heights.  Syria said last month that it is ready to go to another war with Israel in order to free its occupied territories.

Syria has repeatedly reaffirmed its sovereignty over the Golan Heights, saying the territory must be completely restored to its control.  Since 2011 when foreign-sponsored militancy first broke out across Syria, Israel has been using Golan to prop up Takfiri terrorists.