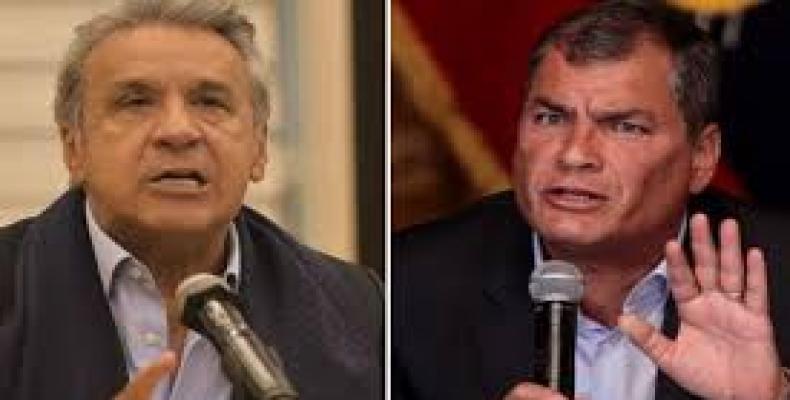 Brussels, April 13 (RHC)-- Former Ecuadorean President Rafael Correa confirmed that his Facebook account had been blocked, just one day after the ex-head of state publicly criticized Lenin Moreno for the withdrawal of asylum previously granted to WikiLeaks co-founder Julian Assange.

“They blocked my Facebook page, 1.5 million followers.  One more step of the brutal persecution, and another show of despair for case INA papers, of which the corrupt [Lenin] Moreno will not be able to escape.  Only in this way will I announce a new page.  Do not believe in "fakes," Correa tweeted.

The INA Papers features prominently in a corruption probe that alleges Moreno’s link to Chinese company Sinohydro’s reported deposit of some $18 million in offshore company Recorsa.
In his hatred, because Wikileaks published corruption of INA papers, Moreno wanted to destroy Assange's life. He probably did it, but he has also done a huge damage to the country. Who will trust in ECUADOR again?  "Asylum", from Greek ásylon: inviolable place art. 41 Constitution??

Recorsa is linked to Conto Patiño Martinez, who reportedly transferred money to a ghost company, INA Investments Corp, that is owned by Edwin Moreno Garces, brother of Moreno.

Former President Rafael Correa heaped criticism on Moreno regarding the South American country’s action against whistleblower Assange.  He said: "It’s incredible.  We cannot imagine something like this.  It’s against international law; it’s against the institution of asylum; it’s against the Ecuadorian constitution, especially because since last year, Julian Assange has had Ecuadorean citizenship," Correa remarked. “It’s the biggest betrayal perhaps in Latin American history.”